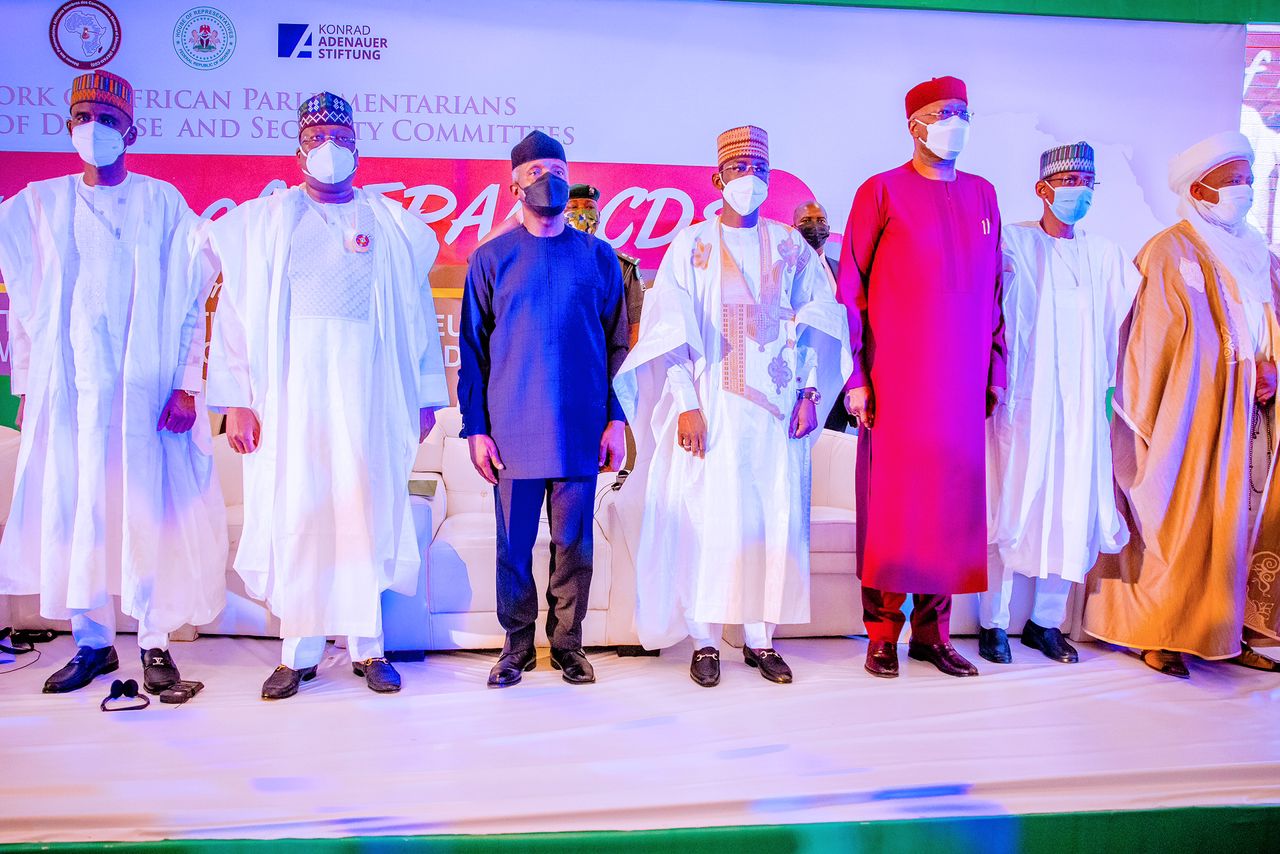 Buhari To Parliamentarians’ Network: African Governments Must Renew Social Compact With The People

It is vital for governments to renew their social compact with the citizenry so as to improve governance, development and build institutions that promote inclusive security and prosperity, which the Buhari administration is actively pursuing to ensure that no segment of the Nigerian population feels alienated and marginalized.

This was one of the highlights of the address by President Muhammadu Buhari today at the 5th Conference of the Network of African Parliamentarians for Defence and Security Committees of the House of Representatives. The speech was delivered by Vice President Yemi Osinbajo, SAN, who represented the President at the event.

The Conference is a strategic platform that brings together lawmakers from across Africa, as well as representatives of the African Union (AU), the Economic Community of West African States (ECOWAS) and the European Union (EU) to exchange ideas, share experiences and deliberate on common approaches to addressing threats to the continent’s collective security.

Speaking on behalf of the President, Prof. Osinbajo stated that, “mobilizing the full spectrum of our national assets also means engaging the broad expanse of our societies. In order to do this, we must renew the social compact that binds governments and the governed and build institutions that promote inclusive security and prosperity. We recognize that having large segments of our population feeling alienated and marginalized is a critical vulnerability.”

He added that “the challenge then is for us to develop measures through policy and legislation that create an umbrella of human security over our people and thereby prevent the forces of destabilization from weaponizing the frustrations of the marginalized. In doing this, we will also ensure that the human and material resources that we should be deploying for growth and development are not consumed in conflict.”

Noting that the Conference was timely, the President urged African governments to have more strategic collaboration to tackle existential threats across the continent.

According to him, “governments across the continent are dealing with multiple threats ranging from terrorism and piracy to transnational organized crime and insurrectionary challenges to the very legitimacy of our nations.”

President Buhari highlighted the efforts by the Nigerian government to address its security challenges, particularly terrorism and insurgency.

“As part of our efforts in responding, we have prioritized our commitment to the constitutional imperative of guaranteeing the security and the welfare of the people. We have embarked upon an ambitious programme of reforming critical law enforcement institutions while sustaining consistently increased investment in our defence and security sectors.

“However, we recognize that the threats we face in this borderless age are often both local and transnational. We recognize that an insurrection or conflict in one country can spread like an infection across borders to destabilize neighbours and create even greater threats that jeopardize regional security and stability. This is why strategic multi-dimensional partnerships are essential to guaranteeing the peace, stability and prosperity of our nations and our continent.”

In addressing these collective security challenges, the President told the gathering of parliamentarians that they have a crucial role in leading domestic advocacy for vital security partnerships in their respective countries.

He also noted that all levels of governments should engage more in partnership with the civil society and development partners to address critical issues on the continent.

“The threats confronting us – whether occasioned by climate change-induced conflict or by hostile armed non-state actors – require us to deepen our cooperation and strengthen the cross-cutting bonds between our defence and security institutions,” he stated.

Speaking further, he said, “I am gratified to note that the newly established European Peace Facility advances the cause of defence and security partnership between the African Union and the European Union notably by paving way for bilateral military cooperation. This facility will significantly enhance our capacity to promote peace and stability on the continent.

“Beyond this, the partnerships we are required to engage in will take various forms and be actualized along different axes. In building a common front against the forces of destabilization, the principle of human security must be the central animating impulse of our response measures.

“At a time that non-state actors are violently challenging the fundamental legitimacy of our countries, it is of utmost importance that governments engage in partnership with civil society. This approach must necessarily encompass not just all of government but all of society.”

Applauding the Network’s objective of deliberating on common approaches to address threats to collective security, the President noted the importance of the African Continental Free Trade Agreement (AfCFTA) in promoting continental integration through trade and commerce.

He said, “The African Continental Free Trade Agreement (AfCFTA) is the most recent manifestation of our resolve to open our borders, increase intra-African trade and grow the continent’s economy.

“It has long been established that deepening the trade links between our nations would serve as a propulsive engine for driving Africa’s growth. But these objectives would be undermined by unchecked destabilization and insecurity. In the light of this, it is clear that this Network has a key role to play in securing our collective prosperity.”

Reiterating Nigeria’s commitment to fulfilling its obligations as a member of ECOWAS and the AU, President Buhari said Nigeria, being “a leading economy on the continent also remains committed to the cause of African integration and all collaborative endeavours that promote that cause of which this august Network is a fine example.”

The President commended the leadership of the Network and the organizers, urging the parliamentarians to identify gaps, particularly in analyzing the prospects of the European Peace Facility, the ECOWAS Protocol on the Free Movement of Persons, Goods and Services, and other relevant Conventions, that will form the basis of legislative and policy actions by countries represented at the Conference.

Dignitaries at the event included the Senate President Ahmed Lawan; the representative of the Speaker of the House of Representatives; Secretary to the Government of the Federation Boss Mustapha; FCT Minister, Muhammad Bello, and the Sultan of Sokoto, His Eminence, Sa’ad Abubakar.

There were also participants at the conference who are parliamentarians and security chiefs from Ivory Coast, Angola, Republic of Benin, Niger, Chad, Cameroon, and Ghana, among others.