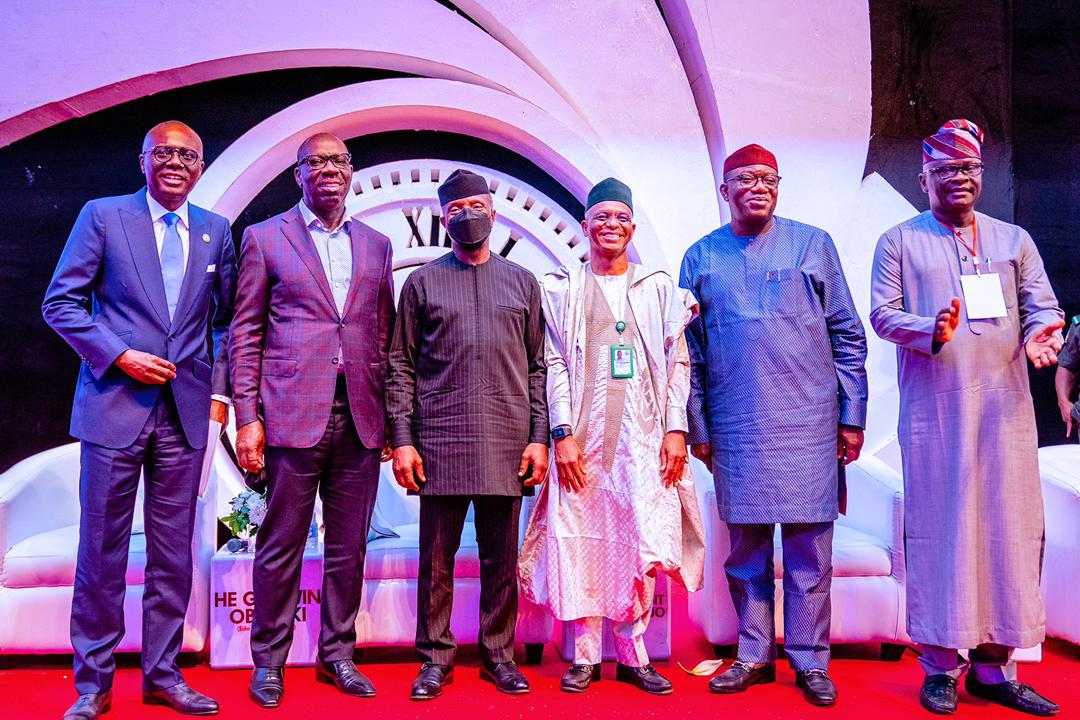 *It is the future of fast-growing economies, VP adds

Calling for a new mindset in the way the affairs of State Governments in the Federation are managed, Vice President Yemi Osinbajo, SAN, has suggested increased investments in local talents, more focus on the knowledge economy, and greater attention to niche areas of comparative advantage.

This way, States can attract investors and boost their economic development.

Prof Osinbajo stated this on Thursday in his keynote address at the Ekiti State Investment and Economic Development Summit and the third anniversary celebration of the government of the State.

Speaking on the theme of the Summit: “Investment Attractiveness and Economic Development: Lessons for Sub-nationals”, the Vice President noted that “the future of fast-growing economies is in the knowledge economy,” while also referencing Ekiti State’s potential in agriculture and dairy production, and technology.

Commending the farsightedness of the Ekiti State Governor with the planned establishment of the Technology Special Economic Zones, the VP advised that “for a digital SEZ to be successful, it must be attractive to digital companies; that means there must be high-quality, well-trained local talent.”

“I’m glad to hear already that on account of the reduction in charges for laying of cables for broadband connectivity, the State is already attracting investments in the laying of cables,” he said.

The Vice President then added that despite Ekiti State being small in terms of population and federal allocation, the State has a bigger economy and GDP than countries like São Tomé, Gambia, Cape Verde, and Seychelles.

In this regard, the VP noted that a collective change of mindset for States is vital towards leveraging comparative advantages and achieving more economic growth.

“Thinking differently, there is a need for a sub-national to think like a sovereign State. You have a bigger GDP and even more revenues than many nations. There is a different mindset when you are sure of a monthly allocation of cash at least enough to pay salaries, whether you generate income or not. This is the challenge. The so-called Dutch disease, one becomes complacent.

“But what if you had to take responsibility for all those who reside within your borders, pay all salaries, from internally generated revenue?”

The VP recalled how Lagos State improved its IGR from N600million monthly in 1999/2000 to about N45billion today. He said the illegal seizure of the allocations to the State by the then Federal Government was the shock that forced the State to rethink.

Speaking further, Prof. Osinbajo noted that although a State within a Federation is not a nation, it must behave like one, to further boost its economic development.

“The economy of the sub-national is a peculiar animal. The State within the Federation is not a nation, but it must behave like one, it derives some resources from the Federal pool, and generates some income, the overall sum will provide infrastructure and services to the community. The size of the sum and the quantum of opportunity available to provide livelihoods for the populace will depend on how the State enables local and external investors, small and large to put their resources into business and commercial activity business in the State, the VP observed.

He continued: “the funded portion of the State’s budget is after all a mere fraction of the sum total of economic activity or income-generating activity, formal or informal within the State. So, the attractiveness of a State to commerce is a radical issue.”

He asserted that “the very lives and livelihoods of the people within the borders of the State, whether the people will live prosperous and happy lives, be educated, have access to affordable medical care, depends on it.”

Similarly, Prof. Osinbajo highlighted how Federal and State governments can benefit from a private-sector led economy, noting that the private sector-led model is the right way to go, as “business is the business of the private sector, while governments should as much as possible facilitate, or at best, collaborate.

“An excellent example is the formerly State-Owned, Ikun Dairy Farms at Ikun Ekiti. After 40 years of inactivity, the State Government divested 76% of its shareholding to a private dairy company, Promasidor, resulting in a company that is now producing over 80,000 liters of milk per month from a herd of about 500 cows.

“There is also the recent concessioning of hospitality facilities such as the iconic Ikogosi Warm Springs, affirming the same principle (of collaboration). This is a very important principle, the idea that it is the private sector that really should lead the economy,” he said.

States must find ways to harness the potential of their people through STEM education in order to become a more attractive destination for investors, noting that the key to the knowledge economy is education, he declared.

“Gone are the days when you could argue that you should be an attractive destination for investment because you have cheap labour. Today, well-trained technology and innovation talent is the game-changer.

“It would therefore be very important for Ekiti State to leverage its famed love and passion for education by focusing on Science, Technology, Engineering, and Mathematics.

“STEM education is vital for being able to participate in the 4th Industrial Revolution which is at once a digital age and a knowledge age. This must be the Fountain of the Knowledge Economy,” referencing the State’s alias.

He went on: “the importance of having a pool of healthy, well-trained workers such as electricians, fitters, mechanics, laboratory technicians, welders, machine toolists, and even web designers, is vital for an ecosystem that will be attractive for technology and innovation investments

In the same vein, the Vice President commended the State Government for establishing the foundations for a modern and thriving economy.

Prof. Osinbajo also pointed out the State’s business-friendly environment, having ranked 18th overall out of the 36 States and the FCT in the inaugural edition of Nigeria’s “Subnational Ease of Doing Business Baseline Survey.”

Ekiti State also had the highest score amongst all the States in the Technical and Professional Skills category of the Ease of Doing Business Rankings, he noted.

According to the VP, “the fundamentals are there; a modern, strong, consistently improving legal and Justice sector. Ekiti State was strongest in the Skills and Labour and Infrastructure and Security indicators where it had an average score of 5.35 and 5.05, respectively.

“This is a State that has vast arable land for agriculture and its value chains, a modern, strong, and effective media and public communications system, an experienced CEO of the State, Governor Fayemi, whose academic, civil society background, excellent relationships with international donors and DFIs, his experience as second term Governor, one-time Minister of Mines and Steel, and as Chair of Governors’ Forum whose important experience in extracting benefits for the States from the Federal Government, all put the State at a distinct advantage.”

Pointing to yet another area of strength, Prof. Osinbajo said “for example, there is tremendous potential for the development of a whole medical education and healthcare industry around the huge private investment in the iconic Afe Babalola University and the ABUAD multi-system Teaching Hospital. I know that the State was helpful in providing access roads and some other facilities to the campus.

“Many countries of the world do not have the number of medical talents assembled in that hospital alone. There are huge opportunities here and I believe that we must tap into those opportunities also.”

Aside from the host Governor Kayode Fayemi of Ekiti State; also at the event were the governors of Lagos State, Babajide Sanwo-Olu; Edo State, Godwin Obaseki; Kaduna State Mallam Nasir El-Rufai and the Deputy Governor of Ondo State Lucky Aiyedatiwa.

Ahead of the summit, the Vice President had commissioned the State’s Civic Centre, which hosted the meeting.

Afterward, the VP moved later in the afternoon to the neighbouring Ondo State, where he was the special guest of honour at the formal unveiling and official dedication of the Dorian Home, Akure, built to cater for orphaned and vulnerable children.

Commending the visioner and founder of the Home, Dr. Tolulola Bayode, for her compassion and philanthropy, VP Osinbajo pointed out that “the Dorian Home for Charity and Social Development has been rendering humanitarian services for almost a decade.”

“Millions of orphaned and vulnerable children need safe spaces to grow and thrive in addition to having their physiological needs met. A place where they are cared for and trained. Women who need succor, or to rebuild their lives after suffering loss or harrowing experiences also need a safe space where they can begin to rebuild their lives,” he added.

At the event, the VP was again accompanied by the Ondo State Deputy Governor, the Industry, Trade and Investment Minister, and also the Women Affairs Minister, Dame Pauline Tallen, and the Niger Delta Affairs Minister of State, Senator Tayo Alasoadura.