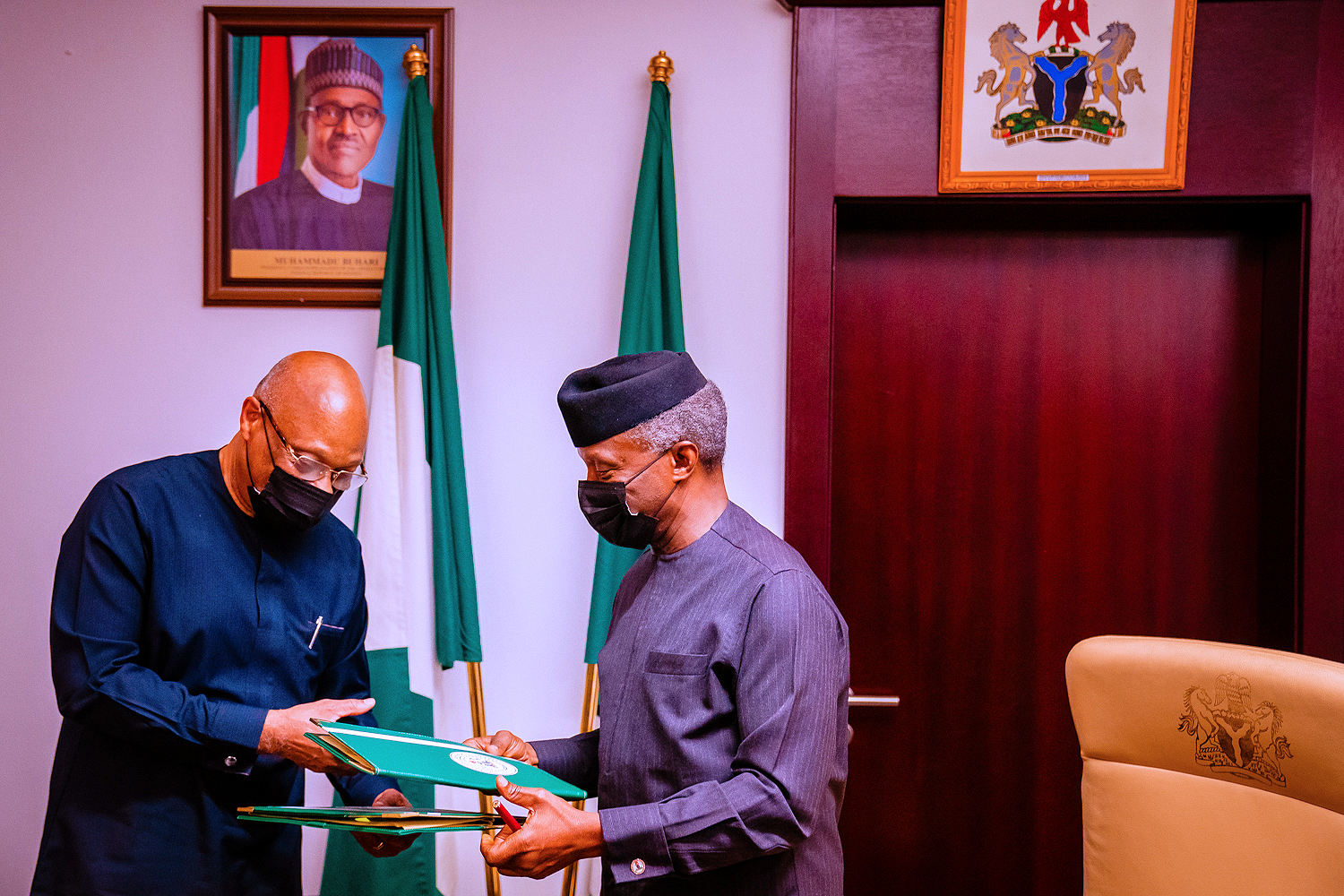 Since security threats confronting Nigeria and the rest of West Africa are becoming more violent, asymmetric, cross-border by nature, and spreading faster than before, the need for effective sub-regional collaboration on early warning systems has become a necessity, according to Vice President Yemi Osinbajo, SAN.

Prof. Osinbajo stated this on Tuesday at the Presidential Villa, Abuja, during a signing ceremony of a Memorandum of Understanding between Nigeria and the Economic Community of West African States (ECOWAS) on the implementation of an Early Warning mechanism and for the establishment of a National Early Warning and Response Centre in the country.

The Strategic Framework for the establishment of National Early Warning and Response mechanisms was adopted by the ECOWAS Heads of State and Government at the 45th ordinary session held in Accra, Ghana in July, 2014.

According to the Framework, the establishment of the early warning system is to provide real-time information on events or other incidents likely to affect social peace and security in the West African region. It also seeks to provide information on the occurrence of social and political events and climate change.

A major objective of a national Coordination Centre for the early warning mechanism is to strengthen the ECOWAS strategy for information sharing among the Member States, so as to avert or reduce threats.

According to the Vice President, “I don’t think there is a better time for this process (than now) which will lead to full implementation of the Early Warning and Response System. We are at a time nationally, and sub-regionally, where the security threats that confront us are becoming more violent, they are asymmetric, spread faster than before, and they are cross border in their nature.

“There is no question at all that this is a moment when we really should be looking at how to collaborate in real-time and in increasingly more imaginative ways in sharing information, and also in sharing competence in order to confront our security challenges.”

Commending the sub-regional body for its foresight in the design of the regional warning system, the VP said “the clear expansion of the ECOWAS early warning and response network to include terrorism indicators is a very important thing.

“I think this has helped a great deal in not only focusing on terrorism, which is, today, possibly the most lethal threat that we face but also in giving us an opportunity as a sub-region to bring the very best possible ideas and to be able to check these threats as quickly and as efficiently as possible.”

While assuring partners of the Buhari administration’s commitment to the programme, the Vice President said “the administration will ensure that the early warning and response system is implemented and we look forward to working with you – ECOWAS -in ensuring that it is fully implemented.”

On his part, the Minister of State for Foreign Affairs, Amb. Zubairu Dada said the signing of the MoU was a consolidation of discussions held at different levels by ECOWAS leaders to find ways of containing threats to security in the sub-region.

Also in his remarks, the President of the ECOWAS Commission, Jean-Claude Kassi Brou, said the signing of the MoU reiterates Nigeria’s commitment to promoting peace and security in West Africa.

He recalled that the regional early warning mechanism was set up by the ECOWAS 1999 protocol relating to the mechanism for conflict prevention, management, resolution, peacekeeping and security, and to support the region in anticipating, mitigating and responding to challenges of human security.

“In order to support member states in strengthening their capacity in preventing human security challenges, the ECOWAS Heads of State and Government in 2014 signed a supplementary Act, adopting the policy framework on the establishment of national early warnings, and rapid response mechanism,” he added.

While commending the Vice President’s leadership and support, Brou appealed to Nigeria to sign an Executive Order to give legal backing to the planned National Centre for Early Warning and Response System.