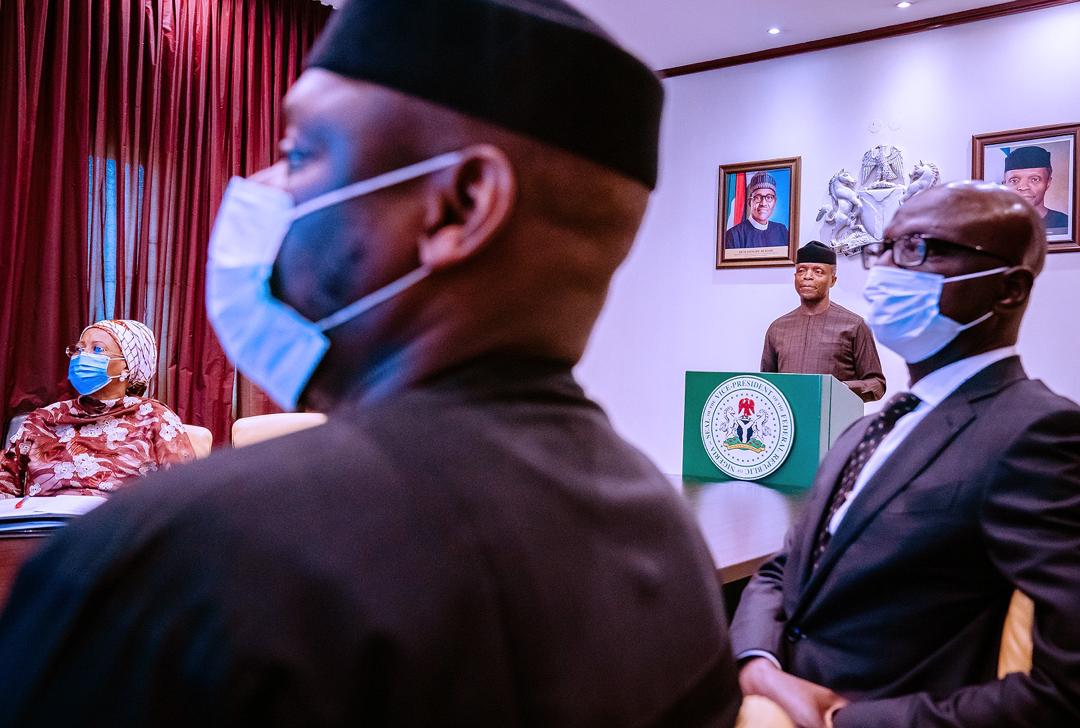 *VP says why President Buhari is excited about the commissioning of 200,000 Yam Storage Facility in Benue

Improving the working and trading environment for small and medium-sized businesses through Shared Facilities, MSMEs Clinics and other government interventions are critical parts of the Federal Government’s drive towards supporting Micro, Small and Medium Enterprises (MSMEs) in the country, while uplifting the lives of ordinary Nigerians, according to Vice President Yemi Osinbajo, SAN.

The Vice President stated this on Tuesday during the virtual commissioning and handing over of the 200,000-capacity Yam Storage Facility at the Zaki Biam International Yam Market in Benue State.

Prof. Osinbajo further noted that post-harvest losses due to poor storage facilities for the nation’s agriculture produce would be a thing of the past if more storage and processing facilities like the new storage facility in Benue State are established around the country.

The Zaki Biam Yam market is said to account for about 70% of yams cultivated in the country, with over 200 trucks loading 2 million tubers of yams weekly from the state renowned as the nation’s food basket.

Prof. Osinbajo noted that, despite this, “the market has had very little storage capacity and its infrastructural facilities are way behind its capacity and the size of commerce that goes on here daily.”

“Besides, post-harvest losses have been the bane of agricultural production in Nigeria, Nigeria produces 17 million tons of yam annually, but loses up to 40% on account of inadequate storage and processing facilities.”

He added that “following discussions between the Federal Government’s MSME Clinics project, the Benue State government and market stakeholders, it was unanimously agreed that this 200,000 capacity Yam Storage Facility should be located right here in Zaki Biam, Benue State.”

The Vice President noted that President Muhammadu Buhari was excited about the commissioning of the facility because “a major concern for him has been that the COVID-19 crisis does not in any way disturb agriculture and the food supply chain.”

“That we are able to commission this project in the midst of the pandemic is especially heart-warming for him,” he said.

The VP explained the role of the Federal Government in the Shared Facilities project under the National MSMEs Clinics.

According to him, “In 2016, Mr. President asked me to chair an initiative called the MSME Clinics. The idea was to provide a meeting point in every state between regulatory or approving authorities (such as NAFDAC, SON, CAC, BOI, FIRS, etc, and small and medium scale businesses in every State.”

“So, at such an event the MSMEs bring their problems and challenges to the regulatory authorities, and the authorities can offer on the spot services and advice to MSMEs. This includes advice on how to access credit facilities through the Bank of Industry (BOI).

“One of the initiatives of the clinics was the idea of building Shared Facilities for the benefit of small businesses operating within clusters. This is because most individual businesses cannot on their own afford equipment necessary for their businesses.”

Aside from the 2-units of warehouses with a combined capacity to store 200,000 tubers of yam in the Shared Facility in Benue, the VP noted that “there is the re-construction of 660 units of stalls/sheds, construction of a Police/market administrative building, construction of 8 units of public toilets, provision of a solar-powered borehole with an overhead tank, construction of internal roads with drainage and installation of solar street lights.”

Prof. Osinbajo commended the Benue State Governor, Samuel Ortom, “for his leadership and the solid support he has given to this project and to congratulate him on this commissioning of this game-changing project”.

“I also commend and congratulate our MSME Clinic partners and everyone that has worked to make this possible,” he said, while also adding that there are now functioning shared facilities in Oyo and Bauchi States.

Virtually present at the commissioning from the National Assembly were Senator Gabriel Suswan and the Representative, Richard Gbande. Also, in attendance were the Agriculture and Rural Development Minister, Muhammed Sabo Nanono; Special Duties Minister, Senator George Akume; and the Minister of State for Industry, Trade and Investment, Ambassador Mariam Katagum. The Governor of the Central Bank, Godwin Emefiele, and several heads of MDAs were also in virtual attendance, while the Benue State Governor, other dignitaries and officials from the State were on the ground in Zaki Biam.