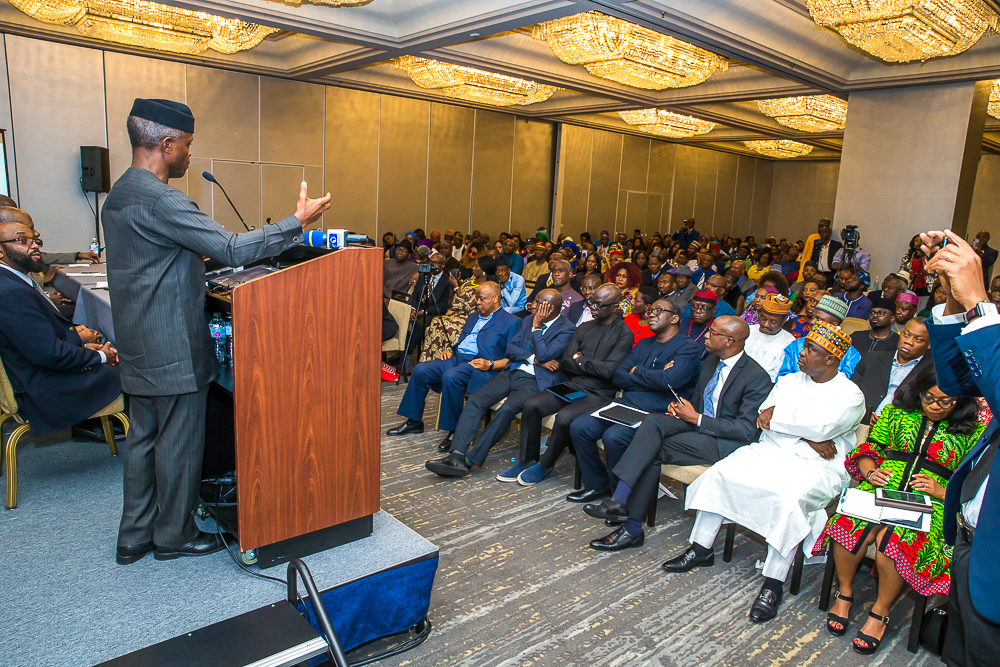 For The Record: What Vice President Osinbajo Said On Kidnapping

* Nowhere was the word exaggerated used

Our attention has been drawn to misleading reports in a section of the media purportedly made by and attributed to Vice President Yemi Osinbajo, SAN, on the security situation in Nigeria, in New York.

For the purpose of clarity, and the records it is pertinent to state that Prof. Osinbajo was entirely misquoted and his words taken out of context in the said media reports especially those that quoted him as saying that “Kidnapping in Nigeria is exaggerated and not entirely new”

Nowhere in the Vice President’s remarks at the townhall meeting with the Nigerian community did he use the word “exaggerated,” not even by implication.

His remarks about the social media being hysterical was a general response to comments made by participants at the meeting about information on happenings in Nigeria especially as they relate to security being shared on social media platforms by unverified sources.

WHAT THE VP SAID

According to the Vice President “I really will urge that you don’t rely entirely for information on social media. I think that the social media tends to be hysterical about practically everything.

“I think there is also a lot of politics involved in some of the information as it comes up. I think it is also important to point out that this new wave of issues of security came immediately after the elections. And there is always a connection between this issue of security and elections because many times, politicians’ arm several of these individuals during the electioneering period, and immediately after an election cycle, many of them, having nothing to do and with arms all over the place, resort to the fastest way of making money which is to abduct somebody and ask for a ransom. And that is just one side of the problem.

“But let me dimension it so that you can really understand it better.

“When people say there is security problem here and there, it is not one thing, it is several different things but if it is described as one thing then it will look bigger than it really is. And I am deeply worried about the fact that we might find ourselves unable to resolve these problems unless we drill down to see what the problems are.”

“With respect to general kidnapping which we have seen in certain parts of the country, again this is not entirely new. When you listen to some of the stories, some of them are simply not true anyway. Some are fueled by politics, but there are cases of kidnapping, there is no question at all about that….and every story we try to track and trace. When you track them, you find out that people just tell some stories, but the truth anyway is that there is kidnapping in places where it has taken place. The way to check it is the work we are doing with State governments namely using technology to track cases. These are economic crimes; if people know that they will be caught, and they will not be allowed to get away with their loot, it will stop in the places where it is taking place. That is really the work we are doing with the State governments. We are doing this in the various zones where we see that there are a rash of incidents. We are trying to put in place trackers and all sorts of other equipment that can be used to locate these criminals.

“I am not so sure how many follow the number of arrests that have been made in different state police commands, several have been made. I don’t think the problem is as massive as that, I think we can deal with the question of kidnapping quite easily. I am sure that not so long a time, the news will be a lot better in terms of kidnapping and we will feel more comfortable about life at home.”