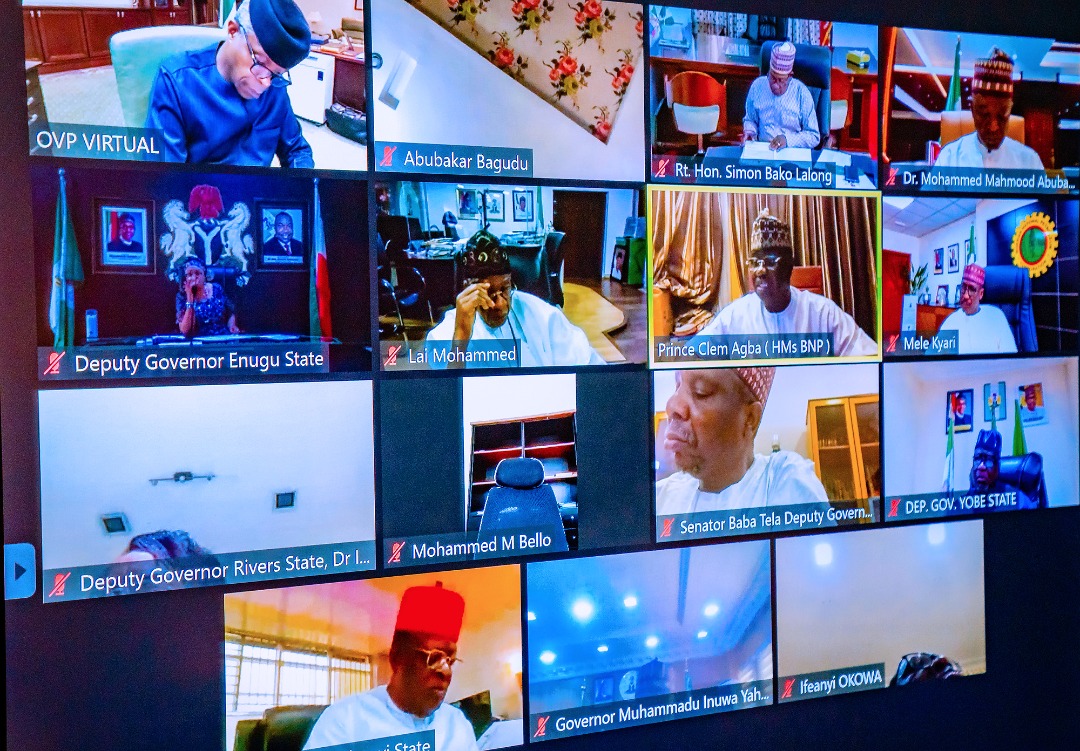 *Urges organizers to consider other options

In receipt of reports from judicial panels regarding EndSARS protests set up in 28 States across the country and in the FCT, the National Economic Council have resolved that payment of compensation to victims should proceed with each State, in collaboration with the Federal Government, establishing the modalities for the settlement of all monetary compensations awarded by the panels.

Equally, NEC, which is composed of all State Governors in the Federation, representatives of the FG, and chaired by Vice President Yemi Osinbajo, SAN, also unanimously resolved today to ensure the prosecution of persons indicted by the panels. The Council specifically directed States “to immediately forward copies of final reports of the panels to their Attorneys-General for prompt arraignment and prosecution of all indicted persons.

“Where incidents in the reports relate to matters of discipline, in addition to prosecution, NEC urged the Nigeria Police Force to take disciplinary action on the affected officers in line with the provisions of the Police Act 2020.”

Also rising from today’s NEC meeting, members strongly advised those planning protests to mark the anniversary of the ENDSARS to reconsider the option in view of “current security situation across the country and the possibility of such protests being hijacked by armed hoodlums and other opportunistic criminals to cause mayhem at such protest events and venues.”

Below are the NEC resolutions on the panels and an advisory on the planned protests:

At its meeting today, 15th October 2021, the National Economic Council (NEC/Council) received an update on the Reports of Judicial Panels of Inquiry into Allegations of Human Rights Violations against Members of Nigeria Police Force and other Security Agencies.

2. It may be recalled that following the October 2020 #EndSARS protests, which later transformed into violent demonstrations, in furtherance of resolution of NEC, twenty-eight (28) States and the Federal Capital Territory (FCT) (under the auspices of the National Human Rights Commission) had set up Judicial Panels/Commissions of Inquiry (Panels) to investigate allegations of violations of human rights levied against members of the Nigeria Police Force and other security agencies, especially members of the disbanded Special Anti-Robbery Squad (SARS).

4. Out of the 28 States, 11 States (Abia, Ekiti, Enugu, Gombe, Kwara, Nasarawa, Ogun, Ondo, Osun, Plateau, and Rivers) have submitted their final reports to Council; with Lagos, set to finalise its sittings on 19th October 2021, submitting an interim report. Governors of other States including Delta and Ebonyi at today’s meeting also indicated that their reports would be submitted soon.

5. Following deliberations on the recommendations of the panels, NEC agreed/resolved as follows, (and this applies to all the States and FCT that set up the panels):

PAYMENT OF COMPENSATION TO VICTIMS
6. Each State, in collaboration with the Federal Government, shall establish modalities for the settlement of all monetary compensations awarded by the Panels. Already, as resolved by NEC, a number of States have set up Victims Compensation Funds, from which several victims have already received payments of sums awarded to them by the panels.

PROSECUTION OF INDICTED PERSONS (SECURITY PERSONNEL AND CIVILIANS)
7. Council directed State Governors to immediately forward copies of final reports of the panels to their Attorneys-General for prompt arraignment and prosecution of all indicted persons.

8. Where incidents in the reports relate to matters of discipline, in addition to prosecution, NEC urged the Nigeria Police Force to take disciplinary action on the affected officers in line with the provisions of the Police Act 2020.

IMPROVED EFFICIENCY OF NIGERIA POLICE FORCE AND OTHER SECURITY AGENCIES’ ARCHITECTURE
9. NEC called on the leadership of the security agencies to ensure that –
a. Persons recruited into arms-bearing security agencies undergo psychiatric evaluations and drug tests before enlistment and periodically after enlistment to ensure that the personnel are psychologically fit to carry live weapons and to identify behavioural tendencies that may require psycho-social interventions.

b. Personnel of the agencies dutifully observes Rules of Engagement in the discharge of their functions/duties around and within the civilian populace.

c. While acknowledging the various initiatives introduced by the Federal Government to:

*strengthen police accountability through the Police Service Commission,
*sustain improved funding and budgetary allocation to the Nigeria Police Force and other securities agencies,
*and the lifting of the ban on recruitment of police officers,

Council urged the Federal Government to give priority to the general welfare of police officers and personnel of other security agencies.

In particular, it advocated the review of pension and gratuity of retired police officers and attainment of parity of remuneration by police officers with sister security agencies.

d. Undertake a comprehensive assessment of all police stations across the country with a view to ensuring that they are fit for purpose.

e. Nigeria Police Force and other security agencies should deploy cutting-edge technology in the fight against crimes.

f. Nigeria Police Force to, in line with the mandatory training provisions of the Police Act 2020, prioritize training of Police Officers on procedures for the entrenchment of Human Rights Provisions guaranteed by the Constitution and on the professional handling of weapons.

g. All those detained by the Police as a result of the EndSars protests are expeditiously processed with due regard to the principles of fair hearing.

h. The system established within the Nigeria Police Force for receipt and handling of complaints or petitions is strengthened, and all police officers on duty should be in police-approved uniform with their full names and force numbers boldly written for easy identification.

i.The States should, as resolved by NEC:

ii)Establish standing committees under States Ministries of Justice to address human rights violations on a continuous basis; and

iii)Take measures aimed at flushing out miscreants squatting in uncompleted buildings, and other blackout spots that serve as hideouts for criminals.

THE NATIONAL ECONOMIC COUNCIL ALSO ISSUED AN ADVISORY ON PUBLIC PROTESTS AT THIS TIME AS FOLLOWS:

While appreciating the role of lawful peaceful protests in the advancement of public discourse under democratic governance, the National Economic Council (NEC) strongly advises those planning public protests across the country to mark the anniversary of the #EndSARS, to consider other lawful alternative means of engagement.

This is because of the current security situation across the country and the possibility of such protests being hijacked by armed hoodlums and other opportunistic criminals to cause mayhem at such protest events and venues. Council, therefore, urges the organizers to reconsider their plan.

NEC would also like to point out the various actions already taken by Federal and State Governments to address the grievances that led to the 2020 protests, including:

* the disbandment of SARS;
*broad police reforms;
*establishment of judicial panels of inquiries to investigate allegations of human rights violations by members of the Nigeria Police Force and other security agencies;
* recommendations of which panels are already at various stages of implementation including the setup of Victims Compensation Funds from which several victims have received payments of sums awarded to them by the panels;
*and prosecution of police personnel indicted by the panels.

These are commendable actions that ought to be taken to a logical conclusion in a peaceful atmosphere.

Organizers of the planned protests should explore the various channels of communication with governments at various levels to advance their positions and avert the breakdown of law and order that may result from such public protests.

HIGHLIGHTS OF SOME OTHER ISSUES AT TODAY’S NEC MEETING

Council received a presentation and memo from the Ministry of Finance, Budget, and National Planning on the draft of a National Development Plan 2021-2025, which is a successor plan to the Economic Recovery and Growth Plan 2017-2020.

Among other highlights, the presentation and memo were to acquaint Council with the need for linkage between Annual Budget and Plans.

The plan also targets an average of 5% GDP growth, the creation of 21million jobs, and lifting 35million people out of poverty within the duration of the Plan.

What is new in this plan?

· A mechanism to engage, empower and employ our teaming energetic youths

· Measures to diversify revenue and increase tax to GDP ratio by improving tax administration, including the informal sector, and widening the tax base.

B.
PRESENTATION ON THE GRAZING RESERVE AUDIT COMMITTEE & SYNERGY WITH THE NLTP

NEC received a presentation from the Governor of Kebbi on behalf of the Grazing Reserve Audit Committee. The summary of the presentation was to brief NEC on the essence of the audit which is to document available land in order to aid the implementation of the 10year National Livestock Transformation Plan approved by NEC in 2019. The presentation clarified that the audit committee is not mandated to recover grazing reserves.

C.
PRESENTATION ON THE PROGRESS REPORT OF THE NEC AD-HOC COMMITTEE INTERFACING WITH THE PRESIDENTIAL TASK FORCE (PTF) ON COVID-19 TO EASE THE LOCKDOWN OF THE ECONOMY

· Council received a progress report from the Chairman of the Committee, Delta State Governor on the above.

The Federal Ministry of Health is establishing oxygen plants across the 36 States in the country, but currently, 6 States have been provided with oxygen cylinders so far.

· Nigeria is now classified among the 50 countries in the green zones
D.
STATE PERFORMANCE REPORT ON COVID -19 BY THE DIRECTOR-GENERAL, NATIONAL CENTER FOR DISEASE CONTROL

· Council was also informed on the global situation of Covid-19: over 237million confirmed cases and over 4.8million deaths due to Covid -19. There are now over 6.3billion vaccine doses administered

· An update on travel restrictions on certain countries expected to be announced soon by the FG.

Council was also updated on the situation regarding the Cholera outbreak

Current Cholera situation in the country;

· Difficulty in accessing some communities due to insecurity

The Honorable Minister of State for Budget and National Planning gave Council an update on the under listed accounts as follows: