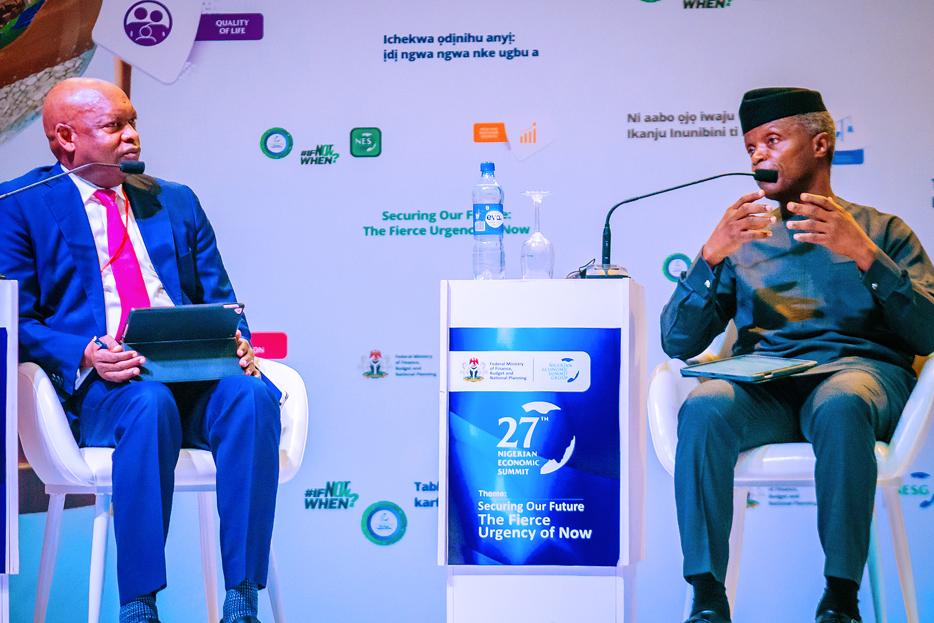 Optimisitc About Country’s Future, Osinbajo Says Young Nigerians Will Unleash Their Resourcefulness On The World

*VP adds: We only need to move few things around, invest more in the technology, creative industries & human capital development

With the energy of the youth, the resilience of the private sector combined with governments implementing the right policies, Nigeria will make the desired progress despite the challenges in the economy, according to Vice President Yemi Osinbajo, SAN.

Prof. Osinbajo stated this Tuesday while rounding up his thoughts during an interaction at the closing of the 27th Nigerian Economic Summit in Abuja (NES #27) themed: Securing Our Future, the Fierce Urgency of Now.

According to the Vice President who also praised the strong will of the average Nigerian, “we can see that there is a will to do things, there is energy, resilience, resourcefulness. My take is that this country is one that is waiting to happen and it will happen. It will take all of our resources, and all of our effort to make it happen, and it will happen.”

He noted that “we must focus on what this country offers in terms of all the resources that we have, human, natural and everything that we have – the will, the energy, the innovativeness of the Nigerian.

“This sort of country, a country with all that we have, can simply not fail, and it is only a matter of getting things right and moving a few things around, and we will be well on the way to the kind of progress that we ought to experience as a country.”

Prof. Osinbajo explained that despite the limitations caused by the COVID-19 pandemic among other challenges, government was working hard to address defects in the system, and noted that recent results were indicative of recovery across different sectors of the economy.

His words: “I believe very strongly that all of the great ideas that we have, the young people waiting to unleash their energy and resourcefulness on the world, all of those are just waiting to happen.

“I believe very strongly that this country affords us the opportunity and the space to be able to achieve great things. We should keep our focus.”

He further noted that the Buhari administration was ramping up efforts in different sectors to improve development and the economy.

While urging state governments to do more, especially in the area of education, the VP stated that “we must emphasize Science, Technology, Engineering, Arts and Maths (STEAM). This is an area where a curriculum is being redeveloped to accommodate that.

Citing the work being done by the National Economic Council in developing the country’s human capital, the VP said, “at the level of the NEC, which I have the privilege of chairing, one of the things that we have tried to do with the whole human capital development space, we have a whole dashboard where we are looking at performances in the states.

“What the Federal Government tries to do is set the standards and then support in whatever way possible. But it is a huge enterprise and we are also finding a lot of entrepreneurial activities around it. We must just keep our focus on what we need to do namely, the curricular and teacher training.”

Prof. Osinbajo restated the commitment of the Buhari administration in ensuring inclusive growth through education leveraging technology, noting that the overriding theme for government was value addition.

He said, “I am a firm believer in the fact that government’s business must be to just take care of the macro issues – access to capital and good training. And we tried that with our N-Power programme where we gave tablets to beneficiaries and those tablets were loaded with material for entrepreneurial training etc. Many of them were able to benefit from this initiative. The opportunities are huge for training and getting a lot of the young people into that space.”

Prof. Osinbajo noted that the Buhari administration has prioritized investment in social amenities, social welfare, and development of the health sector.

He said that “social amenities are crucial, not just for attracting investment, but even for the standard of living of people who live there.”

The VP stated the importance of the national health insurance scheme, noting that “without compulsory health insurance, we simply cannot bring together the resources that are required to provide decent healthcare for 200 million people, growing by 5 million every year… I think the game-changer is health insurance.”

On developing the health sector and government’s ongoing reforms, the VP said, “We are at a point now with the healthcare reform committee, which I have the privilege of chairing, where we are looking at all these options. We are trying to see in what ways can we ensure that this will work.

“So, there are huge revolutionary changes that need to be made and I believe that they are entirely possible. And we are at a point where these things are accessible to us, with time we can do these things, I am certainly looking forward to some of the reforms that are possible.

Prof. Osinbajo however commended the successes so far recorded in public health in the country.

According to him “we have been able to set a standard for public health and that was seen in our COVID-19 response. Our response to the pandemic, a major public health challenge was probably one of the best anywhere in the world. Just in terms of response.”

Continuing, the VP explained that “we have had years of developing a public health system. We are familiar with how to deal with Lassa Fever, Malaria, Polio, we have done immunization on scale, so we have a lot of experienced hands in doing so. But clinical health is an area where we have a deficiency.”

His words: “just a few days ago, we were opening a hospital in Lagos. What this hospital was able to show us is first of all the sheer number of doctors in the diaspora who are experts in their own fields and are coming home to work. The doctor who comes home to work is still available for work elsewhere.

“Even the way medical services are delivered today is so radically different from the way it used to be. It is possible now to get the best of help and while we were there in one theater, we were able to communicate with some other expert who was in the US and was able to talk to us. So, even telemedicine is possible, it is available, and there is a lot that we can do.”

In addition, the Vice President highlighted government’s efforts in creating the environment for the growth of technology and creative industry, noting the need for more investment in these areas.

“I spoke earlier about the Technology and Creativity Advisory Group and the creative aspect of it is the Nollywood and entertainment and that whole industry, and there is support in terms of funding. But what I have found is (about) the infrastructure that is required.

“There is a major project that is going on at the National Theatre in Lagos, which is funded by the CBN and the banks and this is devoted entirely to creativity. This is a massive area where we certainly need a lot more investment.

The Vice President added that with regards to the 4th Industrial revolution, Nigeria “is in a good place leveraging technology and the creativity of the youth”, but noted that a lot could be done to achieve more results.

“We have the best advantage which is that we have young people, the majority of our population over 60 percent are under 25, they are energetic, creative and are ready to go. What we need to do is to see how we can support them, access to capital, training, and all of that,” he said.

“For example, transport went down 49%, and now they are back with 77%. The construction sector went down by almost 40%, and has returned to a much more modest positive,” Prof. Osinbajo explained.

On Climate Change, the VP said Nigeria’s position must be re-echoed at all forums of negotiations, and that the emphasis should be on fairness, justice in the transition from gas.

At the closing event of the 27th Nigerian Economic Summit, the Vice President engaged in a “Conversation” with Mr Kyari Bukar, a Director of the NESG, and Mrs Chichi Aniagolu-Okoye, the Country Director of the Ford Foundation in Nigeria.