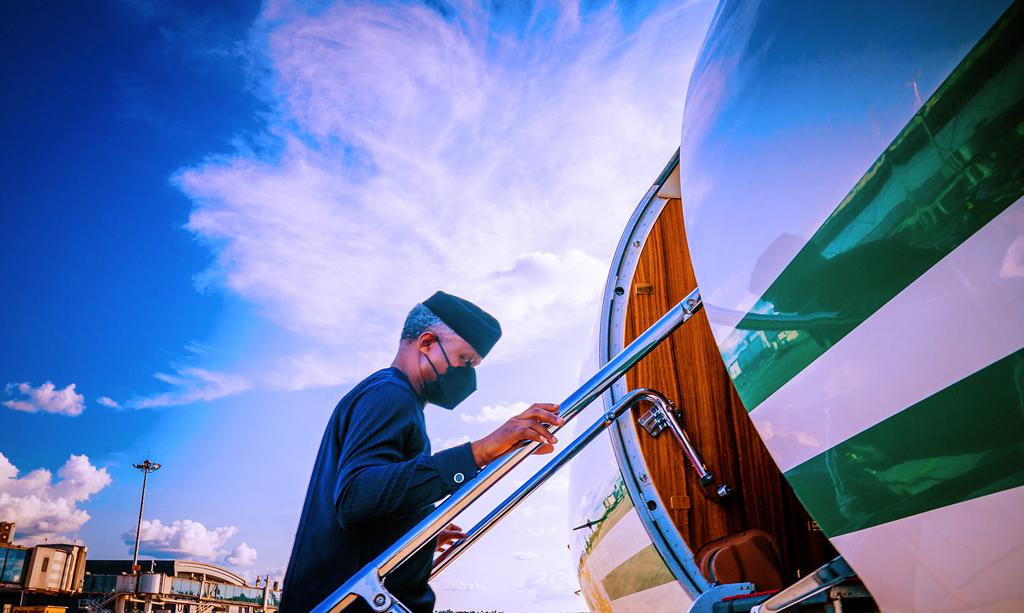 *Event holding ahead of Climate Conference to be hosted by UK

Vice President Yemi Osinbajo, SAN will today leave Abuja for London, the United Kingdom where he is billed to represent the President at a United Nations High-Level event on the Energy Transition in Africa agenda with a special focus on Nigeria.

The event holding tomorrow at the Imperial College will feature meetings organized by UN Energy ahead of the UN Climate Conference COP26 which would be hosted by the United Kingdom in Glasgow, Scotland.

Prof. Osinbajo will also hold talks with the President-Designate of COP26, Mr Alok Sharma, a cabinet rank UK Minister and the Chair of the UK Government’s COP26 Energy Transition Council (ETC), discussing issues regarding the 2050 global Net-Zero emissions target and the need for the international community to align on the key elements of a just and equitable transition for all. The meeting holds at Whitehall.

The Vice President will also deliver an address at the Imperial College London, where he is billed to interact with the academic community on the global energy transition and Nigeria’s position on a just transition. Imperial College is at the forefront of research on generating a new understanding of the investment opportunity in renewable energy, clean technologies, and climate-resilient infrastructure.

Nigeria is playing a prominent role in shaping the energy and climate agendas in 2021. In its role as a Global Theme Champion for the theme on Energy Transition at the UN High-Level Dialogue on Energy, Nigeria led the advocacy on behalf of developing nations for the clean energy offer and recognition of various transition fuels.

Nigeria also put forward an ambitious Energy Compact focused on accelerating energy access both through electrification and access to clean cooking solutions and has been a focus country for the Energy Transition Council (ETC) of the UN Climate Change Conference (COP26).

The Vice President will be accompanied by the Minister of State for Environment, Mrs Sharon Ikeazor and the Special Adviser to the President on Economic Matters, Dr Adeyemi Dipeolu, among others.

He is expected back in the country on Sunday 10th October, 2021.

Return to News - October 2021 Section
Clear thoughts from the Office of Prof. Yemi Osinbajo on the Economy, Politics, Foreign Affairs, Culture and more.
Share the View
Tweets by ProfOsinbajo
Speeches