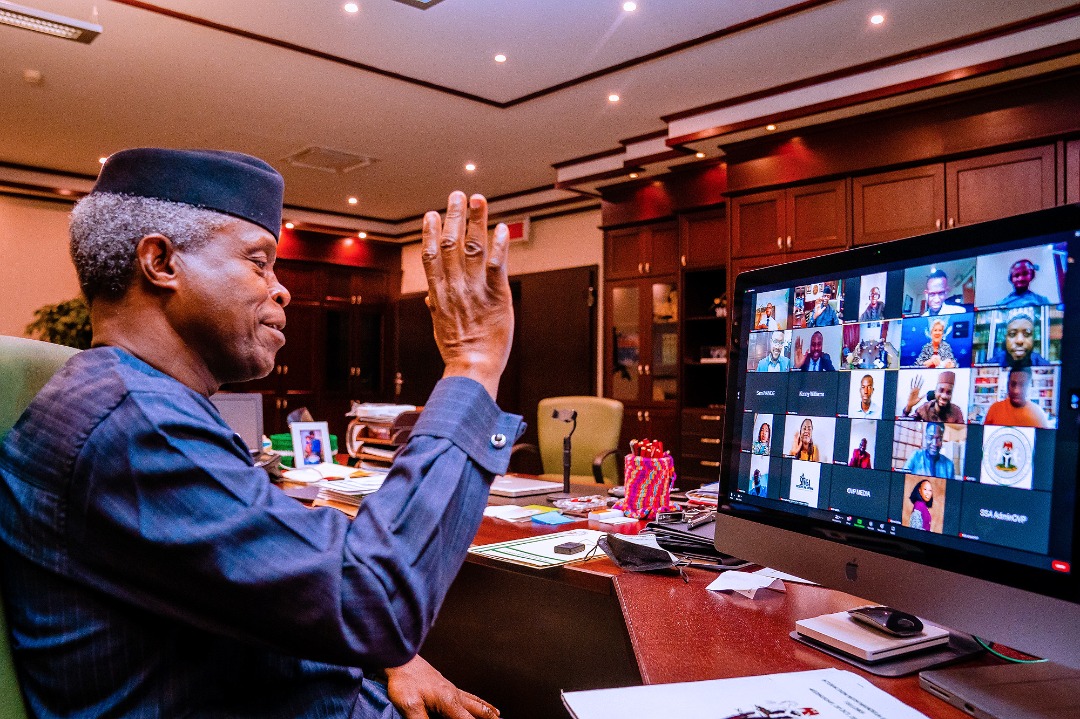 *VP recalls time as Lagos Attorney-General, says, “without public office, I wouldn’t have been able to make the changes required”

The way to transform society is largely dependent on the actions and decisions of those who occupy public offices. This is why young people in Nigeria must get involved in politics, according to Vice President Yemi Osinbajo, SAN.

Prof. Osinbajo said this Wednesday at a virtual forum where he interacted with Nigerian Fellows of the Mandela Washington Fellowship for Young African Leaders. The interaction included a Q & A session where questions were posed to the Vice President ranging from education, health, and youth engagement issues.

According to the VP, “you need to go the extra length if you are not already involved, get involved in politics—while a lot can be achieved in civil society, government still holds the ace in terms of capacity and resources to bring social goods to the largest numbers.

“Besides, being deciders instead of pressure group at the table in policy formulation are hugely different positions. The consummation of our great ideas to transform our societies ultimately will depend on “those politicians” as we sometimes derisively describe them.”

Continuing, the VP noted that “African nations and especially our country, cannot afford to have its best minds and most committed social activists remain only in the civil space. No, we simply can’t afford it, you have to get involved in politics. You have to be in the position to make the difference on the scale that is required.”

“Of course, there are many who will not be involved in politics but those that are inclined should, and there will be many challenges even in the winning or getting heard in politics. But I want to say to you that it should be an objective that you should set for yourselves, to get involved at whatever level of politics so that you can make the difference on the scale that is required,” Prof. Osinbajo added.

Speaking further about the potentials of young Nigerians to effect the desired change in their communities, the Vice President described the efforts of young African innovators as “Africa’s most exciting story – the story of a present and future that could be steered by our continent’s incredibly talented and optimistic young men and women.”

Commending the innovation and creativity of the fellows, Prof. Osinbajo said “within any generation, only a few wholeheartedly take on that challenge – the challenge of building a society. Most believe that the task is for someone else and that such endeavors cannot pay the bills.”

Recalling his days in civil society engagements and later in politics as Lagos State Attorney-General, the Vice President noted that “it took public office for me to be able to get the scale of change that is required to make a difference.”

His words, “without public office I would have remained a pressure group activist, I would have done some nice things, but I wouldn’t have been able to make the changes that my country required.

“I was chair of the Legal Research and Development Centre, where we worked on civil rights issues and legal defense for the poor. We did a couple of legal defence initiatives, we got funding from donors and tried to do the best we could.”

He added: “If I count the numbers that we did all the years it will be around maybe a hundred or so. We achieved some good, but compared to the scale of the problem, it was really a little.

“The reason why I make this point is that other States after what we did in Lagos copied that very example. So, many States improved remuneration and a wide variety of things.”

Prof. Osinbajo stated further that “the second thing we did in Lagos at the time is that we established the Citizens Rights Department. For the first time in the history of our country, a department was established in the Ministry of Justice for the rights of citizens.

“That was important because the Ministry of Justice is not just a ministry of law and order, it is a Ministry of Justice for the people. And that department had what was called the Office of the Public Defender, and that was a concept we borrowed from some US States and we were able to do legal defence, government provided the funding, for thousands of Lagosians.

“But the more interesting part of that story is that almost every state in Nigeria adopted the Citizens’ Rights Department, adopted the Office of the Public Defender. Now, go back to when I was an activist working in the Legal Research and Development Centre, where we tried to do some work on legal defence. We did a few but certainly couldn’t achieve the scale that we achieved when we were in public service.”

He said, “as an English-speaking country, we should be beneficiaries of some concession as opposed to being forced every two years to take the same test especially if you have passed it once before.”

The Fellowship is the flagship program of the U.S. Government’s Young African Leaders Initiative (YALI). Since 2014, nearly 5,100 young leaders from every country in Sub-Saharan Africa have participated in the Fellowship.

Besides the Fellows of the Mandela Washington Fellowship, other participants at the meeting were the United States of America’s Ambassador to Nigeria, Amb. Mary Beth Leonard and the Special Adviser to the President on Social Investments, Mrs Maryam Uwais, among others.