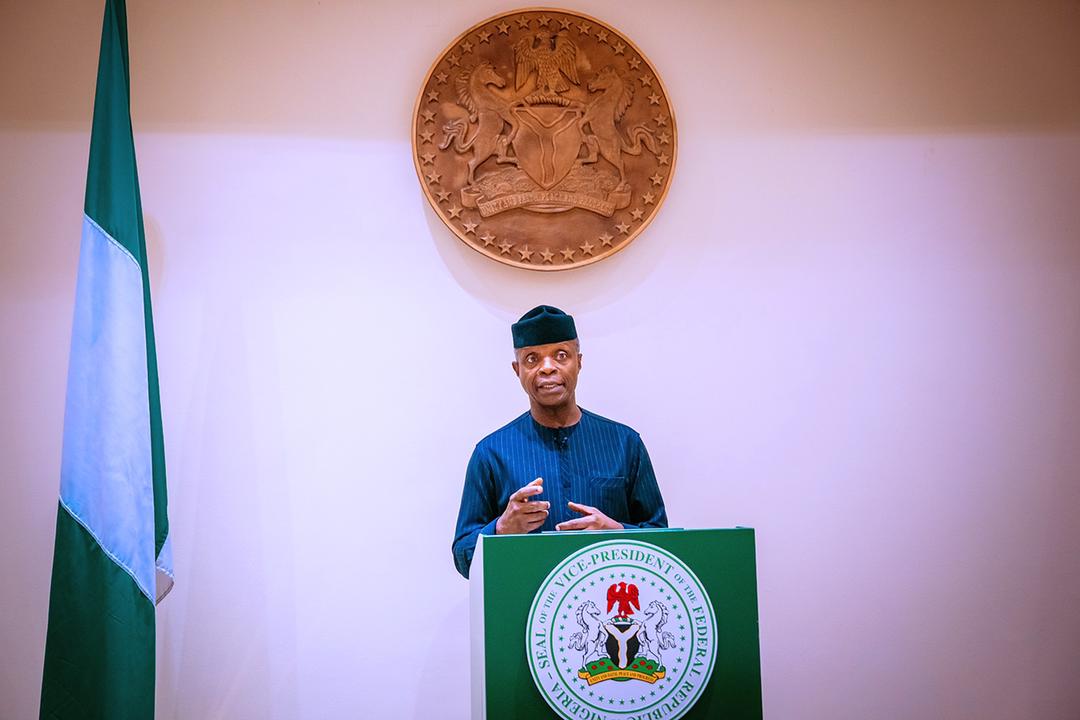 Why The Judiciary Must Embrace Technology

*Adds: Innovation is a matter of urgency for the legal profession

The Nigerian judiciary must embrace technology and innovation, not only for the evolution of the profession and national development but also to ensure that the country’s justice delivery mechanism is run on a system of enforceable, discernible laws and efficient institutions, according to Vice President Yemi Osinbajo, SAN.

Prof. Osinbajo stated this in a pre-recorded speech on Monday as a guest speaker at the 2021 Annual Law Week of the Nigerian Bar Association (NBA) Lagos Branch, themed ‘Disruption, Innovation and The Bar’.

Speaking on how the country’s justice delivery system can support critical investments in today’s very dynamic economy, the VP noted that “questions also need be asked about the readiness of our profession to engage in new markets as presented by the African Continental Free Trade Area. Already Nigerian Banks and financial services are crossing borders in Africa, acquiring banks in several African countries. So, the AfCTA will open new trans-border commercial opportunities, and our profession should pay attention to the rules of engagement for legal services and how they may propel our business.”

According to the Vice President, innovation in Nigeria’s legal profession requires urgency in both thought and action, especially in a world that currently thrives on a knowledge economy, and where some jobs, including legal jobs, are being threatened by digitization and Artificial Intelligence (AI).

Citing the example of how continuous improvement in the quality of smartphone cameras disrupted global sales of digital cameras, the VP observed that now “AI is commonly used to perform tasks such as legal research and due diligence, document and contract review, and the prediction of legal outcomes – these are tasks that would have been performed by lawyers.”

“With the continuing progress in technology, it is only a matter of time before the time capsule catches up with us in Nigeria,” he stated while calling for continuous improvement in the institutional capacity of judges, court registries, court staff, and court infrastructure.

He added, “As digitalisation has already disrupted other industries, it is possible to predict that AI will go further and disrupt the business model of the legal industry.

“For example, the AI legal service called ROSS is an AI system that can research and offer legal opinions about questions that may be posed by lawyers. And ROSS is then able to provide an answer; a properly considered legal opinion, taking into account the case laws and statutory authority in order to be able to come to that conclusion… So, providing predictive legal opinion is no longer the exclusive domain of lawyers, and as the years go by, it will become even more so.

“We are part of the global marketplace for investment and legal services. So, the extent to which we can attract business to our country depends in part upon investor perception of the quality of our justice delivery system. If we are seen as inefficient and ineffective, we would lose out to more efficient systems.”

Speaking on the issue of delay in the country’s justice delivery process, Prof. Osinbajo further noted that the country’s judiciary ought to find ways to tackle jurisdictional challenges, particularly delays in court judgments, among others.

“I argued an appeal at the Court of Appeal in 2013, only to learn yesterday as I discussed with former colleagues in the law firm where I worked, that the appeal at the Supreme Court is not even listed to be heard in 2021. As someone said; our problem is not access to justice, it is exiting the justice system with some credible result.

“Should we not be evolving a cost award system that recognizes the court as a finite public resource, and as such delays and other dilatory tactics are visited with deterrent costs?

Noting that the Law week, as well as future engagements, provided an opportunity for some reflections by legal practitioners, the VP raised pertinent issues that would spur innovation and growth in the country’s judiciary.

He said, “For example, our jurisprudence on jurisdiction – does it promote legal certainty or help to cloud the issues even further? Have jurisdictional challenges become a potent weapon that strikes blindly in all directions? What is the quality of judicial thinking, is it a mere recourse to formulas, catchphrases, and clichés instead of a rigorous analysis of legislative intent and public interest adding some common sense? Are procedural and adjectival rules a bane or tool for justice and speed?

“How does a system explain to society that the current rule established by our apex court is that the signature of a law firm instead of that of an individual legal practitioner on a court process could negate or extinguish the substance of the rights of individuals and commercial parties to justice in a decade’s old case or even in a case that is much older?

“Or how does justice delayed at the convenience of legal practitioners or the benefit of litigants become justice attained?

Also highlighting the need for innovation in legal training and the necessity of virtual hearings, the VP stated that “change is happening quickly all around us in every sphere of life. A sentimental clutching on to traditions will not serve us well. We have seen already that there is nothing sacrosanct about proceedings taking place in physical courtrooms. Virtual hearings are efficient and speedy.”

He commended States, including Lagos, that have embraced innovation and issued practice directions that permitted virtual proceedings during the pandemic lockdown, which he noted was “in line with the commitment the Chief Justice of Nigeria made recently to a full-scale digital revolution in the judiciary that would guarantee electronic filing of court processes, virtual hearings and delivery of judgments.”

Particularly, the VP highlighted how the Supreme Court delivered some time-bound judgments by Zoom (video platform) during the recent strike by the Judiciary Staff Union of Nigeria (JUSUN) strike.

He said, “aside from all the issues around moving firmly to clinical legal education and a more problem-solving teaching orientation, we must also decide the question of whether the Nigerian law school needs to be an in-person residential course or mostly online, including taking examinations online.

“Today it is becoming obvious that cramping thousands of students into a classroom for lectures at the law school is a suboptimal teaching and learning environment.”

He added that “even mock trials can be more effectively done online and courtroom processes can be put on videos and re-watched several times by students. Of course, we may still retain court and chamber attachments.”

The Vice President further stated that the legal profession needs to go a step further by institutionalizing these innovations, because “our justice delivery system, practice norms, and service levels must also show a propensity for innovation, for growth and evolution.”