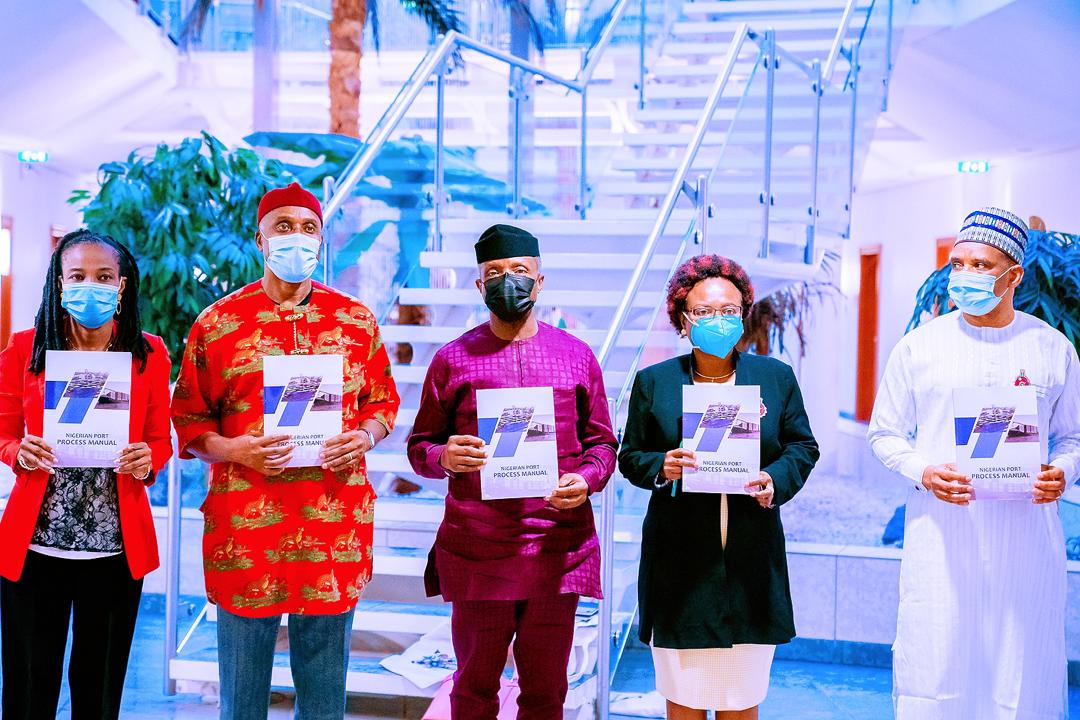 Aside from the benefit of improved efficiency in the operations of the nation’s seaports, effective implementation of innovative ideas in the port sector will rapidly change the narrative, the perception, and the ranking of Nigeria in the Corruption Perception Index (CPI) of Transparency International, according to Vice President Yemi Osinbajo, SAN.

Prof. Osinbajo stated this Wednesday at the launch of the Process Manual on Port Operations in Nigeria, at a brief ceremony held at the Presidential Villa.

The manual was developed by stakeholders led by the Technical Unit on Governance and Anti-Corruption Reform (TUGAR, an arm in the presidency) to address operational gaps as well as improve transparency and accountability in the system.

Prof. Osinbajo stated that “one solution developed to address the vulnerabilities in the port system is the Process Manual on Port operation. The manual is aimed at fostering an enabling environment for domestic and foreign port users.”

According to the Vice President, “An effective successful systemic intervention in the port sector will rapidly change the narrative, the perception and the ranking of Nigeria in the CPI. The Process Manual on Port Operations is expected to be one of the key indicators for the effective implementation of Executive Order 01 issued essentially to promote transparency and efficiency in the business environment, and designed to facilitate the ease of doing business.”

Prof. Osinbajo noted that “the fight against corruption is one of the priorities of this administration and since 2015 the government has invested time and resources to ensure that corruption is curbed. Even after substantial gains have been attained in the fight against corruption in Nigeria, Nigeria’s ranking under certain indices in the Transparency International Corruption Perception Index (CPI) is yet to show an improvement commensurate to the efforts of the government.

“In terms of utility and relevance, Transparency International CPI and its consequent data sources are determined largely by and produced for the consumption of the business community.

“It, therefore, has significant reputational and economic implications for countries that are being assessed. The analysis of the CPI further reveals that the ports are primary points of interface between the country and the business community, whether domestic or international, and the experiences of business community shape their perception which feeds into the reputation of the country.”

Speaking further about the significance of the Process Manual on Port Operations, the Vice President said “Process Manual is a step by step trajectory of processes at the ports. It outlines the actors and timelines for each process, it guides the user by highlighting all required documentation, payments, timelines, and the responsible agencies.

“It equally guides the port operator by detailing the implementation chain and provides clarity on the time required for each process. The Process Manual is expected to ensure predictability, promote transparency and accountability; reduce corruption in port processes; eliminate bureaucratic bottlenecks faced by port users and reduce the opportunity for illegal demands in the ports. It is expected that the Manual will be reviewed and updated as issues and developments emerge.”

While stating the commitment of the Ministry of Transportation in the adoption of processes in the new Manual, the Minister, Rotimi Ameachi, who was at the event said all agencies under the ministry will ensure vigorous implementation in the interest of the country.

On her part, the head of the Technical Unit on Governance and Anti-Corruption Reform (TUGAR), Mrs. Lilian Ekeanyanwu said the initiative is a pilot in the new trajectory of evidence-based response to issues of corruption.”

Mrs Ekeanyanwu noted that “we started off with the rigorous diagnostics in risk assessment and then made some proposals. This is one of the implementations of the different proposals that we have made.

“We will continue the monitoring role that we have been playing in the port sector especially with respect to complaints and redress which is to be accessed from the port service support portal.”

Return to News - December 2020 Section
Clear thoughts from the Office of Prof. Yemi Osinbajo on the Economy, Politics, Foreign Affairs, Culture and more.
Share the View
Tweets by ProfOsinbajo
Speeches