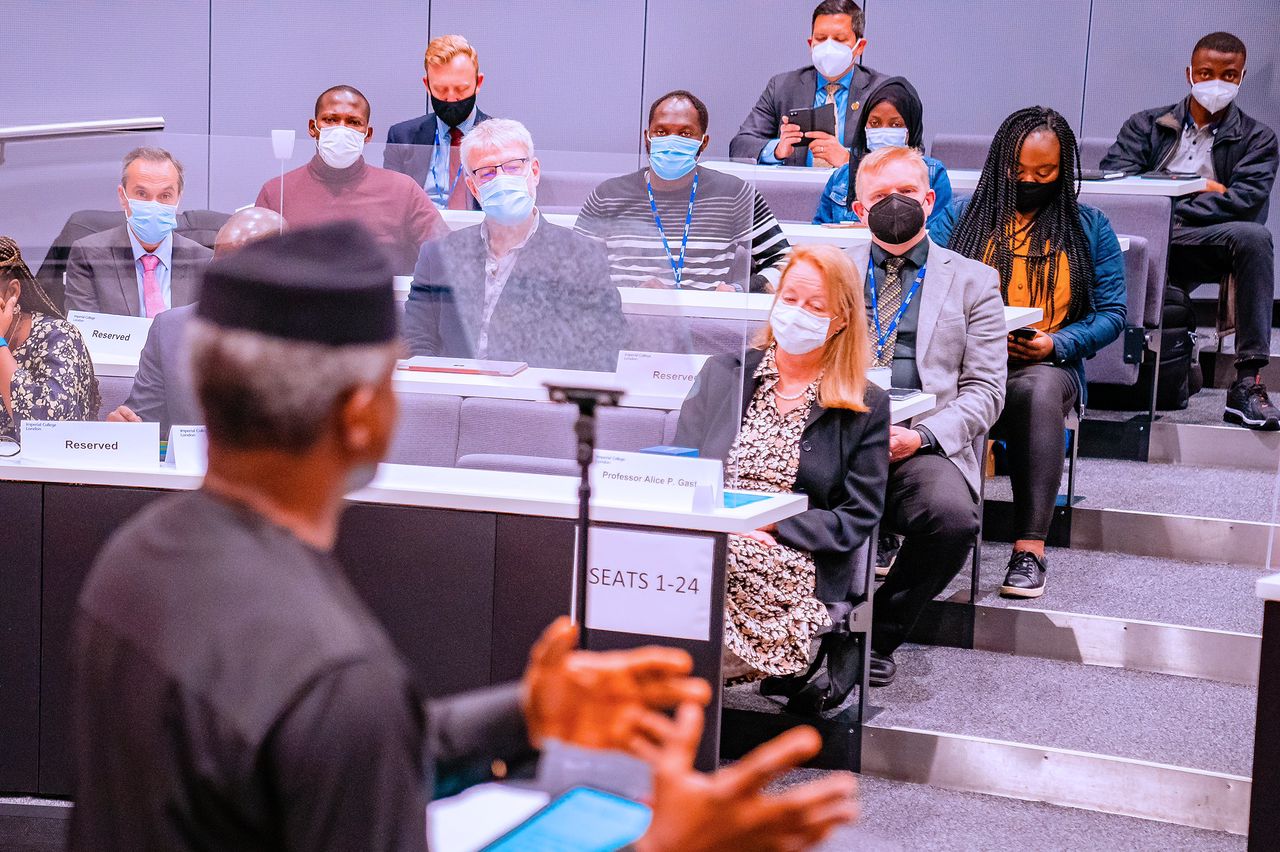 Global Net-Zero Emissions: Gas Projects Should Not Be Defunded, Says Osinbajo In London, Ahead Of COP26 Summit

In its commitment to the Paris Agreement on Climate Change, the Federal Government is already making efforts to use large shares of clean energy sources, but “limiting the development of gas projects, poses dire challenges.”

This is why the international community should understand that the plan to defund gas projects in the run-up to the global Net-Zero emissions target would be unhelpful to developing countries like Nigeria.

This was the crux of the presentations Vice President Yemi Osinbajo, SAN, made on Friday at different meetings in London at the High-Level United Nations event on the Energy Transition plan in Africa with a special focus on Nigeria.

The meetings included first, a closed-door session with COP26 President-Designate, Mr Alok Sharma, a cabinet rank British Minister and the Chair of the UK Government’s COP26 Energy Transition Council (ETC) at Whitehall. Then an interaction with the academic community at Imperial College followed by meetings of the Global Energy Alliance and presentations on the Nigeria Energy Transition Plan and Nigeria’s Integrated Energy Plan.

Prof. Osinbajo observed at Imperial College that Africa as a continent is home to the world’s youngest fastest growing population and in order to create jobs and enable climate-smart industrialization, “the scale and quality of electricity services must increase significantly.”

Continuing, the VP noted that the scaling up in the Nigerian context is based on clean energy, a reflection of the FG’s commitment to the Paris Agreement on Climate Change.

He said this “means building sustainability into our economic planning, and so our Economic Sustainability Plan, includes a plan to provide 5 million homes with cleaner energy through its decentralized solar power programme. This means an estimated 25 million Nigerians would have access to solar power.

“The first phase of this plan is already underway, and we think that this sort of programme will very quickly ramp up our progress towards net-zero emissions.”

But he explained that the moves to defund gas projects wouldn’t help the “whole enterprise,” which “requires gas, especially if we are putting it on the grid. We want to be able to put renewable energy on the grid, we need power for industry, and of course, we are looking at the significant cost of that.”

According to him, “limiting the development of gas projects, poses dire challenges for African nations while making an insignificant dent in global emissions. Energy demand in Nigeria and across Africa is set to rise, as indeed it must, to deliver the industrialization, jobs and economy-wide progress people deserve.”

In addition, the VP explained that “the energy access element of the transition must be linked with the emission reduction aspect of the transition. For too long we have considered these to be parallel tracks. However, pathways to reaching net-zero by 2050 have to include first ending energy poverty by 2030.

“If energy access issues are left unaddressed, we will continue to see growing energy demand being addressed with high polluting and deforesting fuels such as diesel, kerosene and firewood.”

On current energy consumption patterns globally, Prof. Osinbajo noted that “energy consumption in developing countries has doubled in the last 15 years, and is expected to grow another 30% in the next fifteen years. So making capital available to fulfil the growing energy demand in these regions of the world is central to reaching the goals of the Paris Agreement.”

The VicePresident said “Nigeria has already made a commitment to have 30 percent of our electricity supply from renewables by 2030. Also natural gas is currently used for industry, fertilizer manufacturing, and cooking – which are more difficult to transition than power generation.”

He affirmed that Nigeria is “resolutely committed to all of our national determined contributions under the Paris Agreement, and we have in fact updated our commitments in our new Energy Transition Plan. So for baseline business as usual (BAU) projections, estimated BAU 2030 emissions are now at 453 MTCO2e (metric tons of Carbon dioxide equivalent), increasing 31 percent from a 2018 baseline of 347 MTCO2e.

“We are committed to the process and strongly believe the process has to be strong, fair, just, and supported not just for Nigeria, but for most African countries and for many developing countries who have the same concerns that we have,” Prof. Osinbajo added.

Speaking about the expectations of Nigeria and other developing countries, the VP noted that “the ultimate goal of the global energy transition should be to achieve reliable net-zero-energy systems to power prosperous, inclusive economies.”

His words: “efforts are already underway in my country, and in countries across the continent, to include large shares of clean energy sources to fuel that growth. Renewables are the fastest-growing segment of energy today and will certainly be a key economic driver well into the future.

The VP then disclosed that Nigeria is about the first African country that has developed an energy transition plan that seeks to demonstrate its commitment to the global net -zero emissions.

Such a plan, according to Prof. Osinbajo “must be equitable, inclusive and just with a planet and people approach to the transition. As a practical matter that means transition plans that take into account the different realities of various economies and accommodate various pathways to net-zero by 2050.”

Prior to the engagement with the Imperial College students, the Vice President had met the President-Designate of COP26, Mr. Sharma, who is also the Chair of the UK Government’s COP26 Energy Transition Council (ETC).

The discussions were around issues regarding the 2050 global Net-Zero emissions target and the need for the international community to align on the key elements of a just and equitable transition for all.

Other dignitaries that accompanied the VP to the meetings and engagements were Minister of State for Environment, Mrs Sharon Ikeazor; Special Adviser to the President on Economic Matters, Ambassador Adeyemi Dipeolu; Nigeria’s High Commissioner to the United Kingdom, Amb. Sarafa Ishola, and the UN Special Representative of the Secretary-General on Sustainable Energy for All (SE forAll), Mrs. Damilola Ogunbiyi, among others.