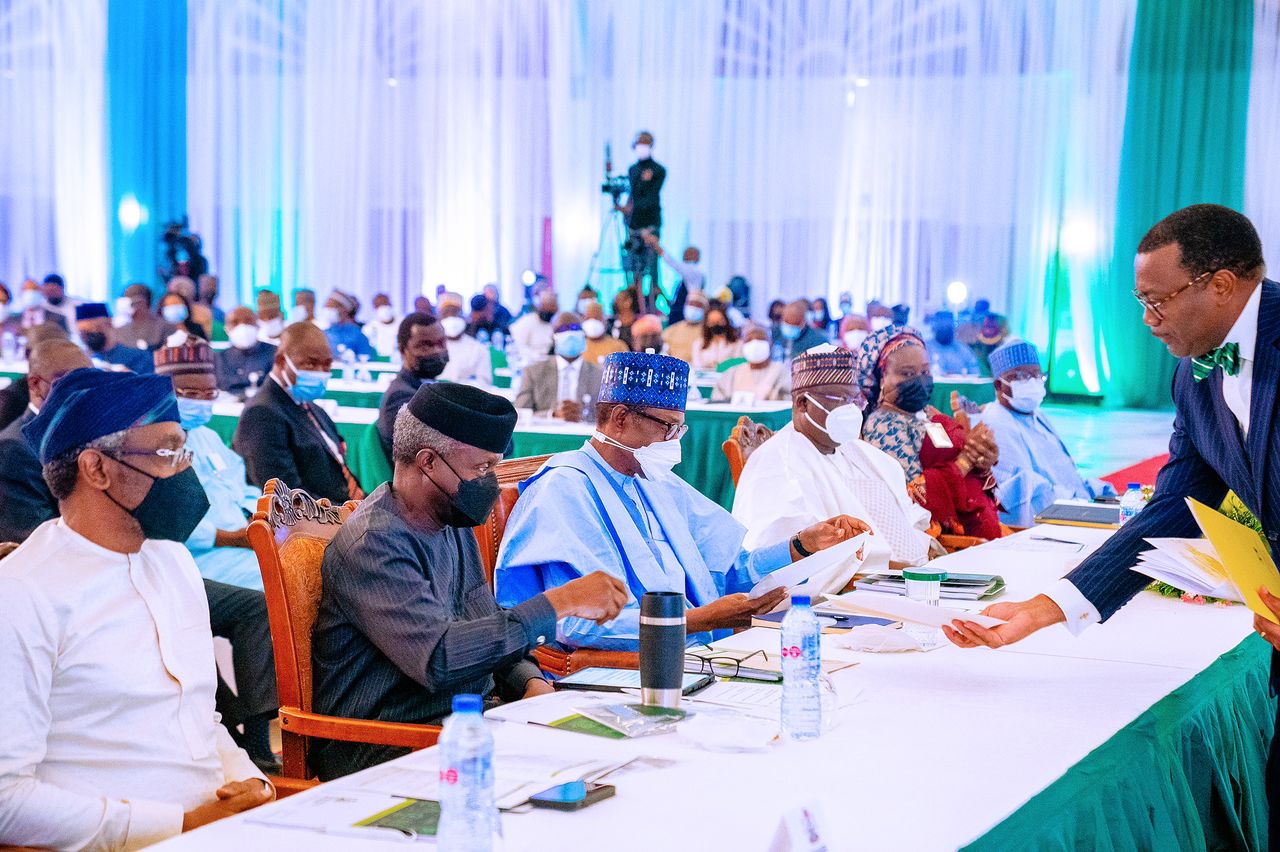 Despite the challenges of funding and other issues, the implementation of the N2.3 trillion Economic Sustainability Plan, ESP, has made a significant impact across different sectors.

It has helped the country to effectively tackle the fallout of the COVID-19 pandemic, by creating jobs and safeguarding existing ones, while also putting the economy on the path of sustainable growth.

But Vice President Yemi Osinbajo, SAN, is concerned about delays from the structured lending financing source of the ESP, which has suffered significant delays so far.

These were some of the highlights from Day one of the two-day Mid-Term Ministerial Performance Review retreat, presided over by President Muhammadu Buhari, where the Vice President on Monday afternoon delivered the progress report on the ESP implementation.

At the retreat organised to assess progress made towards the achievement of the nine key priorities of the Buhari administration, Prof. Osinbajo stated that “the ESP tried to mitigate the shock of COVID-19, but also took the opportunity to try to tackle longstanding structural challenges while repositioning the economy for the future.”

But since the ESP implementation began, which was credited as a major reason why Nigeria exited recession faster than predicted, data showed that these sectors have rebounded to positive growth:

Speaking further, the Vice President noted that, “in response (to the pandemic), the President took two actions. The first was to set up a small inter-ministerial Committee headed by the Minister of Finance to quickly examine the implications of and the immediate mitigation steps that would be taken for the economic shocks we were experiencing. The second step which Mr. President took was to ask that we draw up a full Economic Sustainability Plan to provide at least a 12-month response to the fallout of the pandemic. And Mr. President asked me to chair the Committee to draw up the plan and later to implement it.

“We were clear – and this was Mr. President’s position – that the only way of avoiding an economic disaster that could last for years was for government to essentially put forward a major fiscal stimulus plan; with clear objectives of saving jobs, creating new ones, supporting businesses that may close down, and employees that may not be paid during lockdowns, and, of course, healthcare support to reduce the COVID-19 caseload.”

The VP continued, “the first objective of the ESP was improved Healthcare and lowering the COVID-19 caseload, the second was restoring growth; the third – job creation and safeguarding existing jobs; the fourth – Increased Local Production, and part of that was what we called the Guaranteed Offtake Scheme; the fifth was Reducing Social Vulnerabilities, and that essentially was looking at how to improve the quality and effectiveness of the Social Investment Programmes and the scope of the programme.”

Since the implementation of different components of the Plan, including the MSMEs Survival Fund, Social Housing Scheme, and Solar Home System, among others, the ESP has recorded significant progress in achieving its objectives.

For instance, Prof. Osinbajo noted that the ESP MSMEs Survival Fund, which was designed to create jobs and safeguard existing ones, has supported 1.1 million Nigerians and businesses nationwide.

Explaining, the VP noted that under the Payroll support, “direct grants were given for a three-month period to 459,000 beneficiaries across the country, who received a total of N90,000 and N150,000 (N30,000 and N50,000 respectively per month) in salaries for the three-month period.

Similarly, under the ESP Agriculture for Food and Jobs Plan, the Vice President noted that 6.39 million farmers have been enumerated so far and these farmers were geotagged to their land.

“Also, 320 hectares of land has been cleared across 8 states at 40 hectares per state. The States are Kwara, Plateau, Cross River, Edo, Kaduna, Ekiti, Osun, and Ogun. These are States that require land clearing. Of course, many States do not require land clearing, and we simply supported those states directly. ₦ 471bn is allocated as loans to farmers across 14 Crop Value Chains, Beef Production, Aquaculture and Poultry Farming.”

The Vice President further said that “a subsidy of N5.1billion was paid to over one million farmers under the Fertilizer Subsidy Programme, which is a critical part of the Food for Jobs programme.

“Mr. President approved a programme of giving subsidies to farmers for bags of fertilisers to each farmer depending on the size of the farm. But the strategy here was to give the farmer the amount of the subsidy directly in cash paid to their BVN verified account. Mr. President approved the immediate disbursement of the Fertilizer Subsidy Fund to smallholder, vulnerable farmers in the country,” he added.

He also mentioned the ESP Public Works and Aviation component, saying “construction work is ongoing on 193 road sections totalling 3,707km of roads; with 26,021 Nigerians employed in rehabilitation/construction of these roads so far. The construction of 345km of rural roads, 205 boreholes and 10 treatment plants to create jobs and develop rural areas in 36 States and the FCT has commenced.”

In the same vein, Prof. Osinbajo said the ESP Social Housing Programme has helped to create thousands of jobs and boost the local building materials industry in the country.

Noting that so far about 1,151.689 hectares of land has been made ready for development, the VP said, “the target is to build 300,000 houses. This has the capacity to accommodate a further 34,550 homes. The Programme is being funded by a mix of resources, including Financing from the Federal Ministry of Finance, and a loan from the Central Bank under the ESP.

“Buyers have a window of at least 15 years to pay for their homes. The design is to build two-bedroom homes costing not more than N2 million – N3.75m for a three-room unit, and N4.25 for a four-room unit.

“At the moment, 4,700 homes have been approved in 7 States for financing for commencement in October. 5,400 are scheduled for November 2021.”

But the VP observed that “progress has been much slower than envisaged. There are continuing delays in the disbursement of funds from the CBN. The Debenture agreement for the sum of N200B with the CBN which represents the bulk of the financing was agreed in April and has been signed by all.”

He had the same observations on the delays in the Solar Power Naija, the ESP Solar Electrification Programme, which is also designed to create jobs and develop a local solar industry and provide access to electricity to 5 million households in off-grid, under-served communities through new solar connections. This would bring energy access to 25 million Nigerians.

“It will include the assembly or manufacturing of components of off-grid solutions to facilitate growth of the local manufacturing industry, while the use of local content will be encouraged. It will create in all 250,000 new jobs in the energy sector,” the Vice President stated.

But the 5m Solar Connections target is being delayed because while N140B was allocated through the CBN to facilitate it, only N7B of that has been disbursed.

Explaining some key challenges of the implementation of the programme, the VP listed unwillingness of CBN to disburse funds, and the risk aversion of Public and private financial institutions, particularly for Power projects.

Funding delays were also noted on the Agric plan of the ESP.

Prof. Osinbajo disclosed that only N14B of the N471B as loans to farmers across 14 crop value chains have been disbursed to commercial banks. Even then, that amount is yet to be utilised by farmers due to late release for the 2021 wet farming season.

He also called on the Central Bank of Nigeria (CBN) to review its strategy on foreign exchange and ensure that the Naira value reflects the market reality, rather than what he described as “artificially low,” deterring investors from bringing foreign exchange into the country.

“As for the exchange rate, I think we need to move our rates to be as reflective of the market as possible. This, in my own respectful view, is the only way to improve supply,” Osinbajo said.

“We can’t get new dollars into the system, where the exchange rate is artificially low. And everyone knows by how much our reserves can grow. I’m convinced that the demand management strategy currently being adopted by the CBN needs a rethink, and that is my view.

Currently, the naira is changing at N411 to $1 at the official side of the market, while the same goes for about N565 at the parallel market.

“The Ministry of Industry, Trade and Investment should handle MSMEs interventions, and we should know what the CBN is doing. In other words, if the CBN is intervening in the MSME sector, it should be with the full cooperation and consent of the ministry of industry.

“Sometimes you will get people who are benefiting more than once because we simply have no line of sight on what is going on, on one side.”

He stated that there should be one clear economic plan, not two, saying “we cannot have a CBN led economic plan and a government-led plan. We would end up duplicating, and even there may be beneficiaries of grants benefiting multiple times.”

On how Nigeria survived the economic challenge of 2020, Prof. Osinbajo praised President Buhari, saying, he deserves the credit for providing steady leadership through the crisis.

“Let me say on the whole, that we have been able to weather the storm of a very serious economic challenge.”

“I think that is largely due to the steady and stable leadership we received from the President. I think if Mr. President had panicked in that period, we would have had a lot of difficulties, perhaps we would be in a much worse situation.

“He deserves the commendation for providing that steady hand when that was required,” Osinbajo said.

In June 2020, in response to the fallout of the pandemic, President Buhari mandated the Vice President as chair of the Economic Sustainability Committee, to coordinate the implementation of the ESP aimed at cushioning the economic effects of the COVID-19 pandemic.