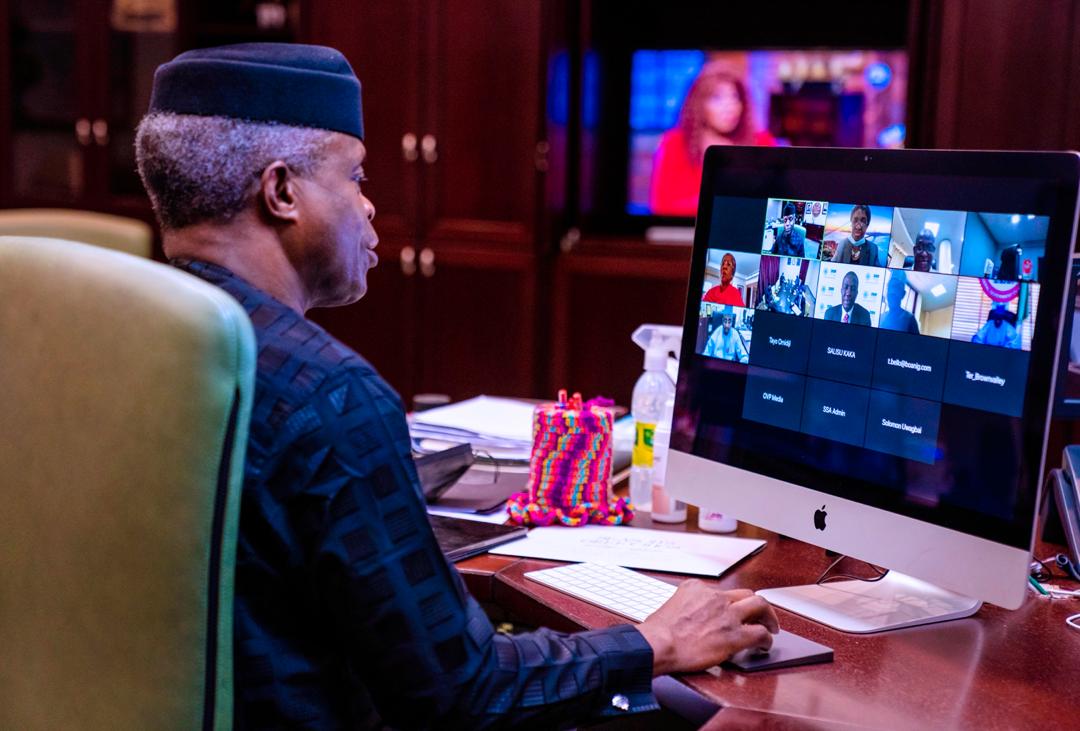 Implementation Of ESP Survival Funds Sends Positive Economic Signals, Yet We Must Scale Up Intervention In MSMEs Sector, Says Osinbajo

*Says small businesses are engines of growth of any economy

In partnership with the private sector, the Federal Government would continue to support innovation and interventions to boost the growth of small businesses across the country, so as to improve the economy and create more employment opportunities for Nigerians, according to Vice President Yemi Osinbajo, SAN.

Prof. Osinbajo stated this Monday at the first meeting of MSMEs stakeholders for the year 2021.

The Vice President urged stakeholders in the public and private sectors at the virtual meeting to be innovative in the interventions planned for small businesses across the country, so as to consolidate on the gains recorded in the MSMEs space in the past few years

Emphasizing on the scale and scope of interventions for the MSME sector, the Vice President noted that, “we must continue to be innovative in the interventions that we plan for MSMEs, because small businesses are the engines of growth of any economy, in the areas of wealth creation and employment opportunities, MSMEs are very important.”

Continuing, Prof. Osinbajo said, “we really have to think out of the box in our engagements going forward. We need to change the way we do many things, we need to look for ways of multiplying our efforts, because the challenges in this space are greater than what we have been able to achieve so far.

“Of course, we have done a lot, but looking at the numbers in need, you will find out that there is a lot more to be done.”

The Survival Fund scheme, designed to cushion the economic effects of the COVID-19 pandemic especially on the most vulnerable small businesses, is a conditional grant to support vulnerable MSMEs in meeting their payroll obligations and safeguard jobs in the MSMEs sector. The scheme is estimated to save not less than 1.3 million jobs across the country.

Commending stakeholders for their cooperation and commitment in the implementation of schemes and initiatives in the MSMEs sector, the Vice President said, “working together, we can achieve more in the MSMEs space. I am glad to hear that there is more collaboration among partners and among Ministries, Departments and Agencies.”

Earlier in her remarks, the Minister of State, Industry, Trade and Investment, Ambassador Mariam Katagum said the implementation of the Survival Fund across different areas lessened the burden of the pandemic on businesses.

According to the Minister, “Having impacted over 300,000 beneficiaries under the Payroll Support scheme, paying them N30,000 and N50,000 as at December 2020; and successfully completing the enumeration and disbursement to 166,000 Artisans as at December 2020, the Federal Government, through the Survival Fund, has filled the gap created as a result of the pandemic.”

She noted that the support provided through the Survival Fund will go a long way in cushioning the impact of the pandemic as observed in comments captured in the testimonies of beneficiaries of the various tracks under the scheme.

On his part, the Special Adviser on Economic Matters to the President, Ambassador Adeyemi Dipeolu, emphasized the need for stakeholders to seriously consider the possibility of expanding the scope of the MSMEs Clinics to cover more beneficiaries and consolidate past efforts.

He noted that having been limited to Nasarawa and Ebonyi States alone in 2020 due to the COVID-19 pandemic, the secretariat, in line with the directive of the Vice President, intends to take the Clinics to the remaining States of Benue, Imo, Lagos, Gombe, Adamawa and Jigawa, in order to ensure total coverage of the country and prepare the ground for a possible nationwide second round of the Clinics.

Ambassador Dipeolu said that other initiatives that require improvement in collaboration and scope of implementation include the Shared Facility Scheme which was launched in Benue and Lagos states respectively in 2020, with Anambra and Kaduna waiting in line to be inaugurated. He noted that the scheme has proven to be one of the key products of the MSMEs Clinics that needs to be sustained and expanded.

In his remark, the Managing Director, Bank of Industry, Mr Kayode Pitan, said partnership with stakeholders grew even stronger in 2020 despite the disruptions of the COVID-19 pandemic, noting that the Bank, working with other stakeholders, will adopt strategies that will grow the MSMEs space in 2021 and beyond through the provision of facilities and other guarantees.

The Managing Director of Access Bank, Mr. Herbert Wigwe, who represented the private sector at the meeting, reiterated the commitment of the sector in supporting the Buhari administration’s vision for MSMEs through the various initiatives implemented in the Clinics and Shared Facility Scheme.

In the same vein, the Executive Director/CEO of the Nigerian Export Promotion Council (NEPC), Mr. Segun Awolowo, spoke about the collaboration among agencies in the MSMEs space in actualizing the objectives of the Federal Government.

He said the NEPC would leverage existing and renewed cooperation among agencies to actualize its new project aimed at supporting businesses in overcoming the COVID-19 disruptions, tagged “from pandemic to prosperity”.

Also, in a brief remark, the Director General of the National Agency for Food and Drugs Administration and Control (NAFDAC), Prof. Moji Adeyeye, said though the COVID-19 pandemic limited the operations of the agency in 2020, some innovations introduced in the wake of the pandemic went a long way in improving its operations and the overall certification of products.

Other stakeholders, including heads of government agencies, expressed their commitment to work together to impact more businesses in the MSMEs space in 2021.

Return to News - January 2021 Section
Clear thoughts from the Office of Prof. Yemi Osinbajo on the Economy, Politics, Foreign Affairs, Culture and more.
Share the View
Tweets by ProfOsinbajo
Speeches

VP’s Speech At A Visit to NCDC National Reference Laboratory