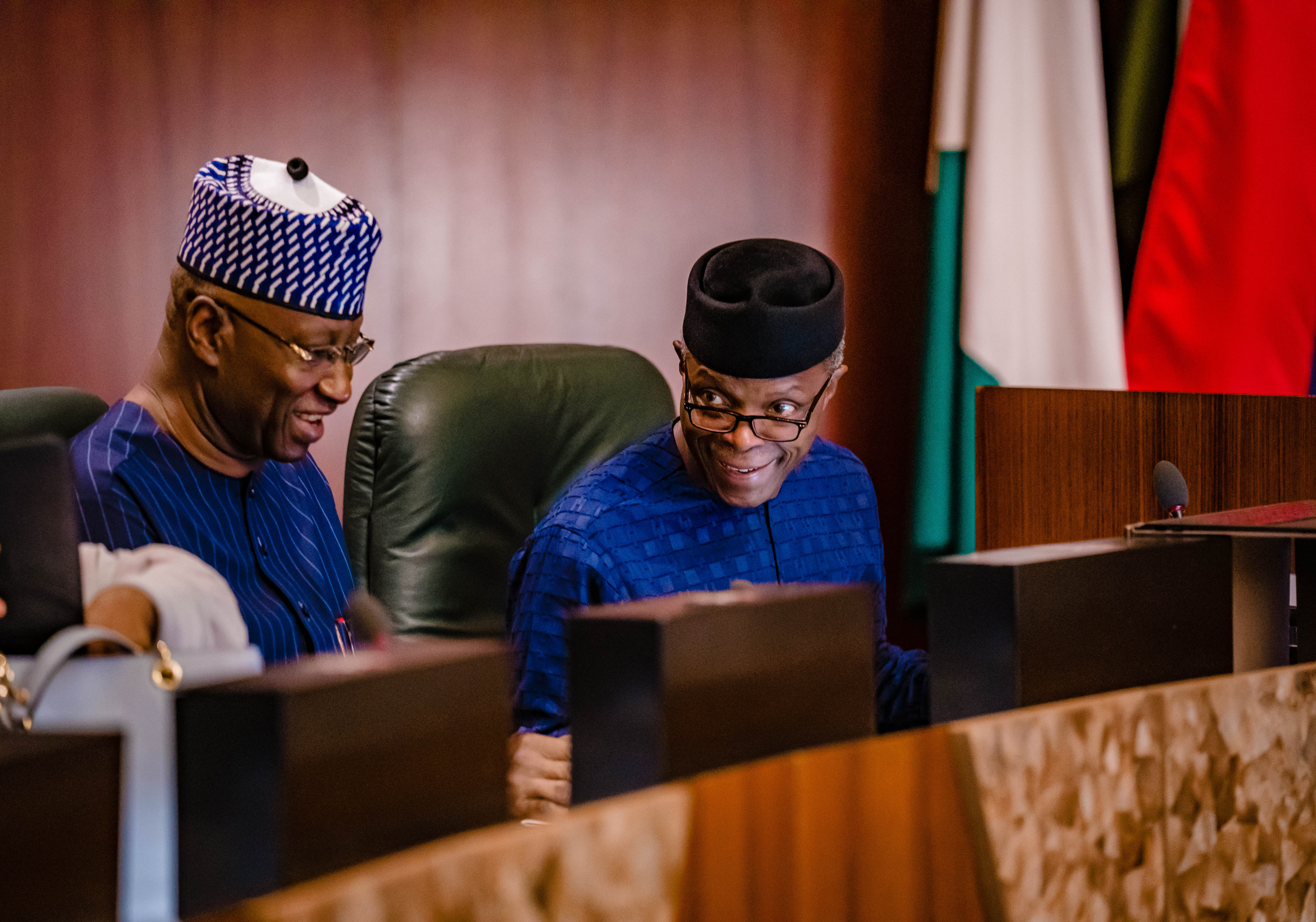 · Non-oil sector reports on the rise, as Finance Minister presents MTEF to Council

The macroeconomic environment of the country has shown significant growth and stability since after the recession, according to a report presented today to the National Economic Council (NEC), chaired by the Vice President, Prof. Yemi Osinbajo, SAN.

According to the Minister of Finance, Budget and National Planning, Mrs. Zainab Shamsuna Ahmed, who made the presentation, there have been eight successive quarters of economic growth since the country emerged from recession.

While affirming the Economic Recovery and Growth Plan (ERGP), as the basis for the Medium Term fiscal strategy, she highlighted that Macro-economic stability has been achieved with growth in end Q3, 2019 at 3.01 per cent; continued increase in Real GDP from 1.89 per cent in Q2, 2018 to 2.01 per cent in 2019; there has been significant growth in non-oil sector.

BELOW ARE HIGHLIGHTS OF THE NEC DELIBRATIONS:

· The Governor of Jiagawa State, Alhaji Mohammed Badaru Abubakar, presented an update on the activities of the Committee.

· The report is sequel to the Zero Oil Plan, envisioned in the Economic Recovery and Growth Plan (ERGP) which is developed by the Nigeria Export Promotion Council (NEPC).

· The implementation of the plan is expected to yield results in 3 key areas:

o Add an extra UDS150 billion (minimum) to Nigeria’s foreign reserves cumulatively from non-oil exports over the next 10 years;

o lift 20 million Nigerians out of poverty, contributing towards SDG-‘’ No Poverty’’.

He reported that the committee has recorded the following achievements:

· Identified Projects based on the Implementation Plan and States Submissions.

· Set- up Templates and Schematics for Domestic Export Warehouse and Anchor Programme for Exporters.

· Identify Companies for the Domestic Export Warehouse and Aggregation Centre for exportable products.

· He further revealed that the other achievements of the Zero Oil Plan to date includes:

o Non- oil exports (excluding natural gas) have risen from U$1.17 billion in 2016 to US$3.16 billion in 2018 meaning that Strategic sectors identified in the Zero Oil Plan have seen growth. For instance, cocoa exports have risen by $79.4 million since 2017, while sesame exports have also increased by $153 million since 2016 – an increase of more than 100% (source: International Trade Centre).

· The plan has identified the creation of five million jobs to date directly supported by no-oil exports, with efforts underway to increase this by 500,000 new jobs annually in line with SDG 8 – “Decent Work and Economic Growth”

· A state Export Development Fund has also been created through N50bn debenture to be disbursed by NEXIM, in which the Central Bank of Nigeria (CBN) has invested. The Fund offers long –term loan at single-digit interest rate to qualifying export-oriented projects under the State Export Development Programme and the Anchor exporter scheme.

After the presentation and discussion, Council agreed to

· Include the Minister of Foreign Affairs as a member of the Committee.

· Follow-up on the obligation of the Nigeria Maritime Administration and Agency NIMASA regarding the financing of the Nigerian Export Promotion Council (NEPC).

B. UPDATE ON POLIO ERADICATION IN NIGERIA PRESENTED BY THE HONOURABLE MINISTER, FEDERAL MINISTRY OF HEALTH

The update was presented by the Honourable Minister of Health and other health officials. He noted that 21st August 2019 marks exactly 3 years milestone without a case of Wild Polio Virus (WPV) in Nigeria.

He, however, identified some challenges as follows:

· Lack of release of counterpart funds by the Local Government Chairman as one of the key problems in achieving successful routine immunization.

· Insecurity concerns in parts of the country.

· The Minister requested the Council to:

o Ensure the sustainability of political oversight by the political class.

o Establish and re-activate of State Task Force on immunizations.

o Ensure timely release of funds by the States and LGAs for immunization campaigns.

UPDATE ON NEC AD-HOC COMMITTEE ON SECURITY AND POLICING

A brief update was presented by Dr. Kayode Fayemi, Governor of Ekiti State and Chairman, Nigeria Governors Forum. He noted that the Inspector General of Police (IGP) has initiated the commencement of Community Policing and there is a plan to consider using N-Power beneficiaries and Youth Corpers as Police Officers in their Local Government Areas.

· Full report to be given at the next NEC meeting

· That Capital market is highly connected and therefore crucial to the country’s economic development.

· The NSE is today one of Africa’s foremost Exchanges servicing the No 1, Economy in Africa with a Market Capitalization of N25.7trillion ($70.7bn)

· Over the last 5 years, N10.3tn in long term capital has been raised by federal and state governments in the form of Government Bonds.

· Unlocking the value will require:

Council welcomed the presentation and noted the proposal

The Minister of Finance, Budget and National Planning reported to council that balances in the under listed accounts as 20th August 2019 is $95,329,245.24.

· Council agreed to constitute a team from the Nigerian Governors Forum to meet with the CBN and Ministry of Finance to finalize modalities for commencement of payment.

The Committee requested for extension of time to finalise and present its report next meeting.

· There has been eight (8) successive month of economic growth since emerging from recession.

· The Economic Recovery and Growth Plan (ERGP), remains the basis for the Medium Term fiscal strategy.

· There has been significant growth in non-oil sector.

· Mr. President is strongly committed to employment generation in this second term

She also noted that

· Considerable success has been recorded in containing insurgency is parts of the North East, with economic activities recovering.

· Recurring conflicts between farmers and herdsmen, as well as incidences of flooding, has affected agricultural products.

· Breaches in NNPC pipelines still regular, partly accounting for low oil production volume in the first half of the year.

· Need to take a bold decision and urgent action to achieve fiscal sustainability and macro-fiscal objectives.

Return to News - August 2019 Section
Clear thoughts from the Office of Prof. Yemi Osinbajo on the Economy, Politics, Foreign Affairs, Culture and more.
Share the View
Tweets by ProfOsinbajo
Speeches