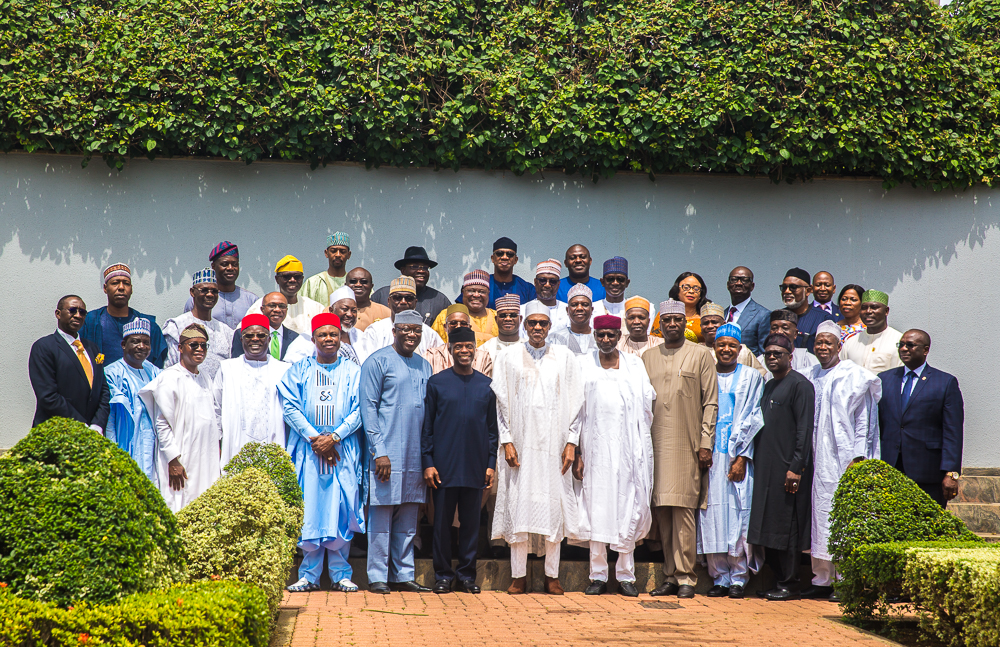 The President, stated this on Thursday at the Presidential Villa, Abuja, when he formally inaugurated the new National Economic Council (NEC), the first NEC meeting into the next level of this administration’s second term of office which commenced May 29, 2019.

In his speech, at the inaugural session of the Council, which is chaired by Vice President Yemi Osinbajo, SAN, the President also urged the Governors to pay special attention to security, health and agriculture in the next four years of this administration, and reminded them that providing free and compulsory education is a constitutional provision.

He said, ‘‘Section 18(3) of the 1999 Constitution as amended places on all of us here an obligation to eradicate illiteracy and provide free and compulsory education.

‘‘Section 2 of the Compulsory, Free Universal Basic Education Act provides that every Government in Nigeria shall provide free, compulsory and universal basic education for every child of primary and junior secondary school age.

‘‘It is indeed a crime for any parent to keep his child out of school for this period. In my view, when a government fails to provide the schools, teachers and teaching materials necessary for basic education, it is actually aiding and abetting that crime.

In his inaugural speech, the President noted that this was a call to action. “I would like to see every Governor rise from this meeting and rally his local Government Chairmen towards ensuring that our schools offer the right opportunities and provide the needed materials and teachers for basic education, at the minimum. ‘If we are able to do this, the benefits will surely manifest themselves,’’ the President said.
The President told the Governors that successes in the four key areas of education, security, health and agriculture would go a long in lifting Nigerians out poverty, and securing the future for sustainable growth and development.

In his remarks, the Vice President warmly welcomed the New Governors and noted that the inaugural Council Meeting was focused on National Security.

The Inspector-General of Police, in his presentation, said the Force is strategizing on reducing security threats. These include engagement and partnership with leaders, community policing, the introduction of Superhighway patrol and monitoring, installation of CCTV for monitoring, reorganisation of the police monitoring team and establishment of police cybercrime monitoring.

The IGP also reported some progress in security measures already taken. These include an improved relationship between the police and members of the public in willingness to give information, apprehension of kidnappers in various part of the country especially in Kaduna and other states, and the recovery of weapons and ammunition and arrest of cultists in some parts of the country.

Following the meeting, a security and Policing Committee was set up by Council, with Governors of Ekiti, Bayelsa, Ebonyi, Katsina, Kogi and Borno States; NSA, IGP and representative of the Chief of Defence Staff as members.

Below are highlights of the inaugural NEC meeting:

A.
PRESIDENTIAL INAUGURATION OF NEC INTO THE NEXT LEVEL
In his Inaugural Speech, the President charged the Council among others:

B.
REVIEW OF SECURITY SITUATION IN THE COUNTRY BY THE NATIONAL SECURITY ADVISER (NSA)

C.
PRESENTATION BY IG OF POLICE ON SECURITY

The Permanent Secretary, Federal Ministry of Finance, also reported to the Council that the current balance in the Stabilization Account as of June 19, 2019, is N17,667,778,861.99.

The Permanent Secretary, Federal Ministry of Finance, equally reported to the Council that the current balance in the Natural Resources Development Fund as of June 19, 2019, is N77,735,485,231.19.