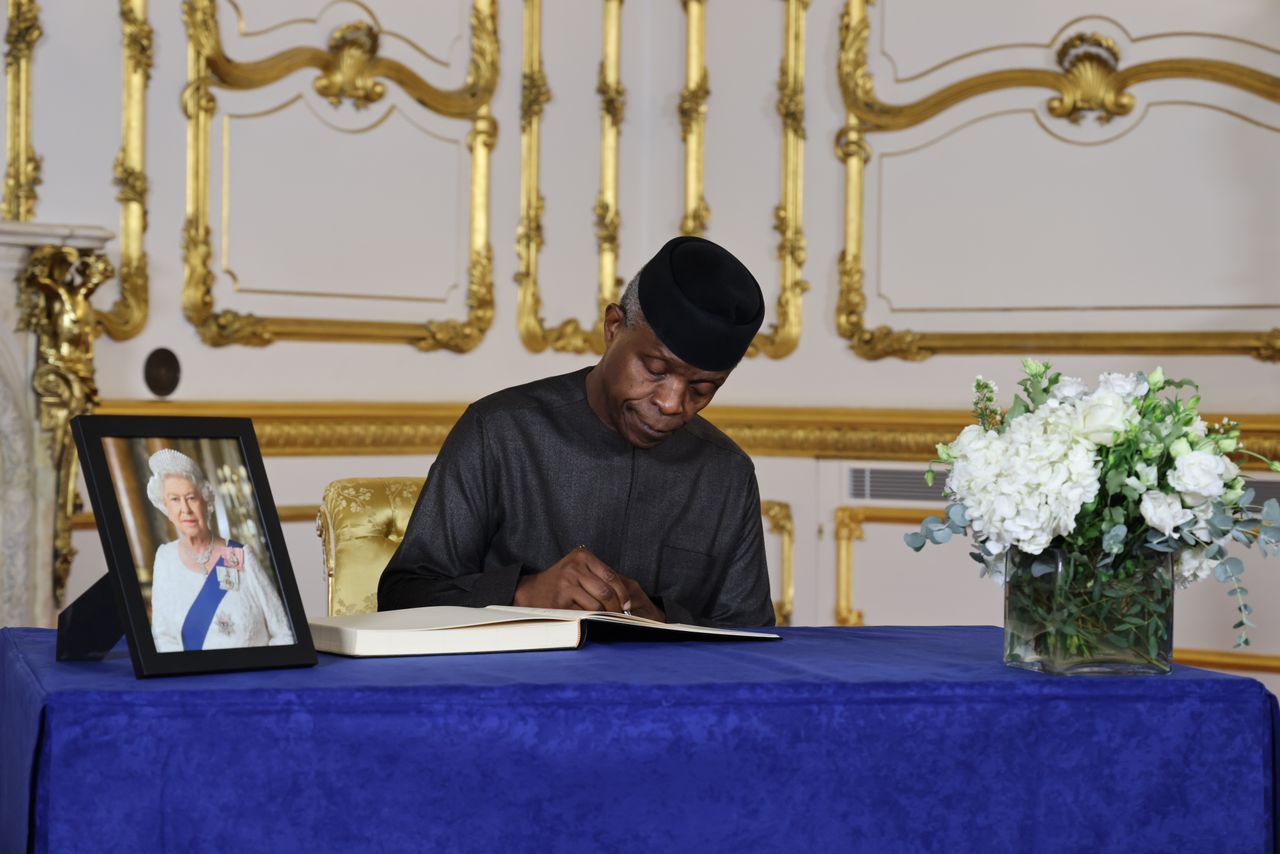 Queen Elizabeth Was A Monarch For All Seasons, Says Osinbajo

The late Queen Elizabeth II was a monarch for all seasons who brought people together from all over the world, according to Vice President Yemi Osinbajo, SAN.

Prof. Osinbajo stated this on Sunday in a short tribute at the Lancaster House.

The Vice President also joined other world leaders to pay their last respect to the late British monarch at the Queen’s lying in state at different times on Sunday. World leaders who visited Westminster Hall to witness the lying in state alongside the VP included the Prime Minister of Canada, Justin Trudeau; U.S. President Joe Biden and French President, Emmanuel Macron, among other royals and Heads of State and Government across the world.

In the condolence register at Lancaster House, the Vice President noted that “Nigeria joins the government and people of the UK, the Commonwealth and rest of the world in expressing our sincere condolence to the royal family on the passing of a monarch for all seasons. May the Lord bless her memory.”

Later at a bilateral meeting between Prof. Osinbajo and the UK Foreign Secretary, they discussed how to improve trade ties between both countries especially expanding opportunities for Nigerian businesses and supporting the country’s climate objectives.

They also discussed the imperative of strengthening international coalition to tackle insecurity in the Sahel and the horn of Africa region.

The UK Foreign Secretary welcomed Nigeria’s participation in the funeral programme for Queen Elizabeth ll, expressing gratitude for Nigeria’s solidarity and friendship with the UK on the mourning of the monarch, and also celebration of the life and times of the late Queen.

By Sunday evening, and at Press Time, King Charles III was hosting the Vice President and other visiting world leaders at a reception at the Buckingham Palace as part of activities for the State Funeral of the British monarch.

On Monday morning, the Vice President will also attend the Funeral Service for the Queen at Westminster Abbey.

Return to News - September 2022 Section
Clear thoughts from the Office of Prof. Yemi Osinbajo on the Economy, Politics, Foreign Affairs, Culture and more.
Share the View
Tweets by ProfOsinbajo
Speeches