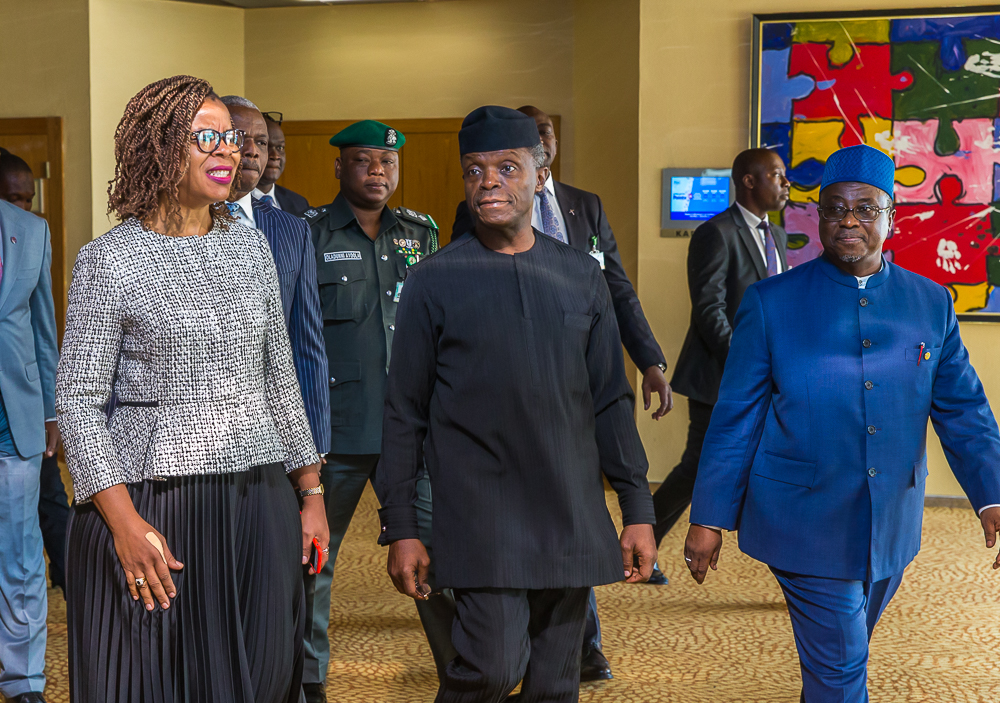 Where Nigeria Is Heading In the Next 10 Years – Osinbajo

The Federal Government’s vision for Nigeria in the next 10 years and more is to transform the economy into an industrialized one with a strong middle class and a place where the majority of the people are living above the poverty line, according to Vice President Yemi Osinbajo, SAN.

Prof. Osinbajo stated this at a Dinner and Interactive Session with some visiting Faculty Members from the Harvard Business School (HBS) led by Prof. Srikant Datar, a Professor of Business Administration, alongside a select group of Nigerian business executives, on Tuesday evening in Lagos.

The Vice President featured alongside Srikant Datar and Mr. Bayo Ogunlesi, a Nigerian Investment banker in the United States of America, in a panel discussion moderated by Mr. Hakeem Belo- Osagie, Chairman of Metis Capital Partners and addressed several issues on power, the economy and climate change, amongst others.

According to the Vice President, “I will like to see Nigeria become an industrialized nation in the next 10 years; with a very strong middle class and most people living above the poverty line. Our policies and programmes are directed at achieving this objective.”

He said the Federal Government had put in place measures that will kick-start the industrialization drive of the country, citing the example of the creation of Special Economic Zones (SEZ) and small manufacturing clusters across the country as some of the steps taken by the government.

He said “practically everything we are doing is to ensure that there is a conducive environment for businesses to thrive.

“The Federal Government is looking at natural economic clusters. We have done a lot of work in five of them, we are looking at 23 others, and we have already set up shared facilities in designated locations to address some of the concerns in production.

“What we plan for the Special Economic Zones is also unique and geared towards that drive to industrialize our economy.”

Speaking on efforts to alleviate poverty, the Vice President said it is being addressed by the government.

When asked what keeps him up at night, Prof. Osinbajo said it is the problem of “extreme poverty; the issue is that the largest number of those who vote for us are the very poor.

“The promises that government makes to them is that their lives will be better and obviously they are looking at their lives being better in the shortest possible time.”

He explained that a number of government policies and programmes were focused on people at the bottom of the pyramid, especially in agriculture and trade, and getting credit facilities to people in order to enable them to improve in whatever they are doing.

He said that many farmers had been lifted out of poverty as a result of some of the initiatives, adding nonetheless that the scale needs to be improved.

According to him, “First, the focus of our government was on agriculture which has the potential to take many out of poverty. We are supporting farmers operating through the out-grower programme and our focus is to attain sufficiency in Rice, Sorghum and Millet production.

“A lot of attention has also been given to the Social Investment Programmes (SIPs) which factored the provision of cheap credit to petty traders—at the bottom of the pyramid. We have given out cheap credits through our TraderMoni and MarketMoni initiatives and this has also proven to be largely successful.”

On Power, the Vice President said the government is committed to finding lasting solutions to issues militating against the improvements that ought to have been witnessed in the sector.

“The issues are enormous but what we really need to do is to re-write regulations and encourage more people to invest in the sector.

“In the next few months, we will unveil a plan that deals with most of the critical issues in the power sector,’’ he said.

Addressing concerns raised about climate change, Prof Osinbajo said Nigeria would not act differently as “the momentum, globally, is in favour of renewable energy and recycling”.

On improving trade among countries in Africa, the Vice President said Intra-African trade is important and is “the way to go” but that there is the need to address concerns around dumping and protection of local manufacturers, amongst others before the endorsement of any agreements.

Addressing the issue of brain drain and efforts to curb it, the Vice President expressed optimism that the steps being taken by the government to improve the business environment in Nigeria will address the menace.

According to him, “As people see that the environment is getting better for business, they will come back, the opportunities for making huge profits are here.”

He also noted that Nigeria was open to business as it has a lot of potential and urged Nigerian investors abroad to look homewards.

“If you are going to do business anywhere in Africa, it has to be Nigeria. This is where you have the energy, you have the drive.

“We are already seeing that kind of activity, business people will always be driven by profit,” Prof. Osinbajo added.

On his part, Datar said he was particularly proud of Osinbajo as an academic in governance, stressing that academics do well in governance.

Also speaking at the event, Ogunlesi said that the era of depending on government for infrastructure was gone, adding the Federal Government had no business running infrastructure in Nigeria, especially the airports.

In a vote of thanks, Emir of Kano, Muhammadu Sanusi II, regretted the high poverty rate in Nigeria especially in the North West and called for urgent action to address it, advocating for a committee on girl-child education to be set up to address issues surrounding early marriage and family planning.