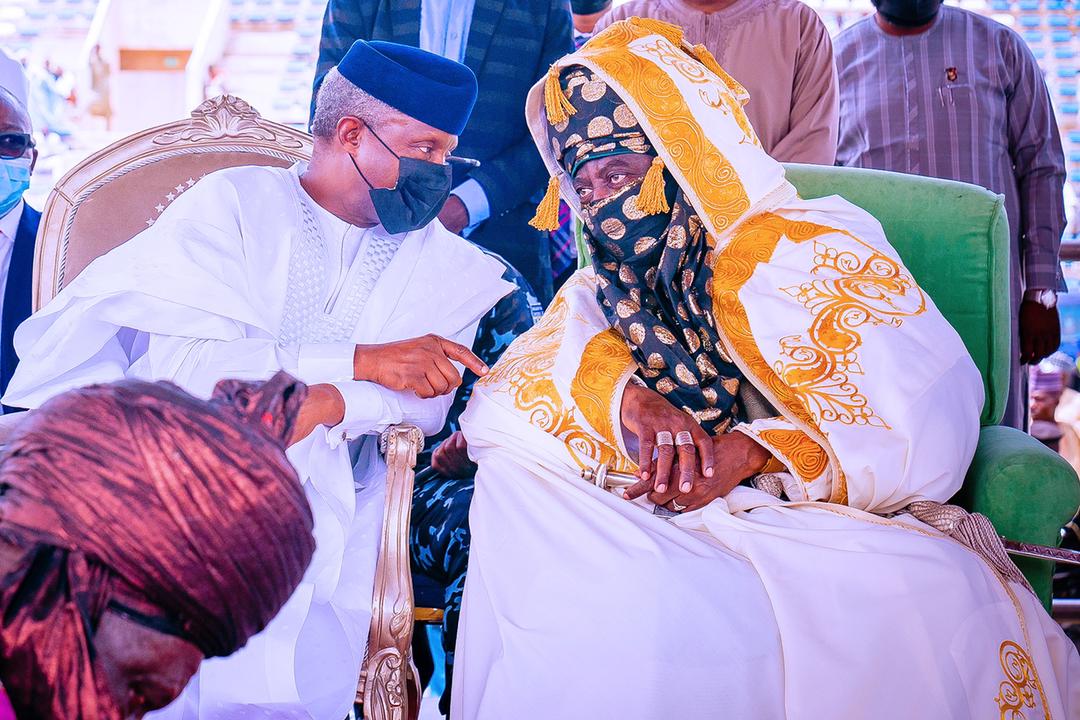 Why Kano Is Home To All Nigerians

Beyond its proud history and traditions, Kano is a melting pot of diverse tribes and cultures and a place that is home to all and for all Nigerians, where they can co-exist peacefully regardless of differences, according to Vice President Yemi Osinbajo, SAN.

Prof. Osinbajo stated this today in Kano, during the coronation of Alhaji Aminu Ado Bayero as the 15th Emir of Kano, where he represented President Muhammadu Buhari.

The event which drew dignitaries from far and wide featured, besides the administration of the oath, and the formal presentation of the Staff of Office to the Emir, traditional rites, prayers, recitals and speeches.

The Vice President, who conveyed the President’s warm felicitations and personal good wishes to the State government and people of Kano, described the coronation as ‘historic’, while noting that Kano is revered as a major commercial and economic centre in sub-Saharan Africa.

“It is only the tolerance of the culture of Kano, where opposite ideas can co-exist peacefully, that you could have a thriving free market economy, with several millionaires and yet also be the base of radical left of Centre political ideas. This is after-all the city of the socialist man of the masses, Mallam Aminu Kano and many of his disciples. Kano is also the home of the richest man in Africa, Alhaji Aliko Dangote,” he said.

He added that, “we are all proud of this city; proud of its legacy of tolerance and warmth and very proud that it indeed remains home to all and for all Nigerians, regardless of tribe and ethnicity, and the melting pot of diverse tribes and cultures assimilated into a robust, vibrant and cohesive whole.”

Congratulating the Emir of Kano on his coronation, the VP said, “Your Royal Highness, it is this great city over which God has given you the good fortune of being Monarch, a privilege which you know comes with the obligation of preserving these rich traditions of brotherhood of all tribes and tongues.

“You inherit not only one of the most revered thrones in Africa, but on a more personal level your great father was known for his wisdom, courage and integrity. He loved his people and served them with honor and complete commitment. You have a goodly heritage but a particularly difficult act to follow. But we are confident that by the grace of God you will exceed the reputation of your illustrious forebears.

“So today, as you ascend the throne of your fathers, carrying with you the love and trust of your people. I can only offer you a prayer: I pray that this land will prosper in your reign, I pray that the Almighty God will be merciful to you and to the people of this land, and that his hand will be upon you to guide and direct you daily. Your family and tribe will increase, your days will be long, and as your days so shall your strength, your wisdom and your favour with God in Jesus name. Amen.”

While also congratulating Kano State Governor Umar Ganduje for “midwifing a generational change of guards that only a few will experience in their lifetimes,” Prof. Osinbajo added that “the swearing-in and handing over of the Staff of Office to the new Emir of Kano is in fulfillment of the extant law and practice of the installation of Emirs.”

Also present were the Ministers of Aviation, Hadi Sirika; Defence, Maj Gen Bashir Salihi Magashi (Retd.); and Agriculture and Rural Development, Sabo Nanono; as well as the Secretary to the Government of the Federation, Boss Mustapha; the Sultan of Sokoto, Muhammadu Abubakar III, and other traditional rulers.